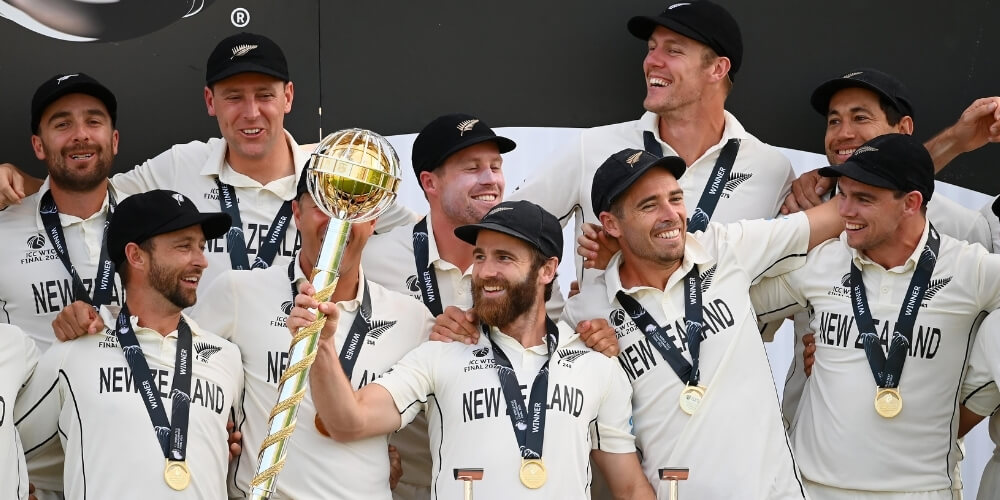 In the end, under the bright skies of Southampton, India was left with only haze, and a well-deserved New Zealand was bathed in the light of being crowned the first-ever world Test champions.

It was a tight and tense game with the ball dominating, but the safe shots of Kane Williamson and Ross Taylor eventually led this golden generation of New Zealand cricketers through a paltry yet tricky target of 139-run and to an 8-wicket win; this is the team's first ICC title since 2000, and also against India in Nairobi.

This is New Zealand's first ICC title in 20 years. They won their first ICC trophy when they defeated India in the 2000 Champions League final.

The team led by Kane Williamson, which had suffered a painful loss to England in the 2019 ODI World Cup final due to boundary counting rules, chased the target of 139 runs with eight wickets in hand on the last day of the WTC final.

Williamson and Taylor's partnership led their team to WTC Trophy

With the modest target of 139 in 53 overs, the New Zealand team finished the game with a score of 140/2. After losing for two consecutive days due to rain, the game was extended to the sixth day.

Off-spinner Ravichandran Ashwin tried to stop New Zealand to 44-2 by taking the wickets of openers Tom Latham and Devon Conway.

But New Zealand captain Kane Williamson and the team's most experienced batsman Ross Taylor remained unbroken with a 96-run partnership.

Williamson won applause for his sporting way of handling losses in the 2019 World Cup final, was not out with 52 runs, while Taylor - who hit the winning boundary -remained unbeaten with 47 runs.

Indian Skipper Virat Kohli defended the team's bowling combination for the final of the World Test Championship (WTC), stating that going into a four-way pace attack could only be done with a fast-bowling all-rounder.

India fielded Ravichandran Ashwin and Ravindra Jadeja along with a pace trio of Jasprit Bumrah, Ishant Sharma and Mohammed Shami.

Kohli argued that there was nothing wrong with Indian bowlers as they needed to score more runs so their spinners could get more time to perform.

"You need to have a fast-bowling all-rounder for that. We've been successful with this combination in different conditions. We thought this was our best combination, and we had batting depth as well, and if there were more game-time, the spinners would have come into the game more as well," Kohli released the statement at the post-match presentation ceremony.

"We lost only three wickets (on day one), but we could have got more runs if the play had gone on without the interruptions. Today, the Kiwi bowlers executed their plans to perfection and pushed us back, and we were probably 30 or 40 runs short," Kohli added.

Ravindra Jadeja, the star all-rounder of the Indian team, is among the best in the ICC test rankings. He has become the world's number one all-rounder player. Jadeja has surpassed the former West Indies captain Jason Holder.

Jadeja took first place in the Test all-around rankings for the first time since August 2017. Jadeja has 386 ratings, while the second-ranked Jason Holder has 384 rating points.

Holder has lost 28 rating points, while Ravichandran Ashwin is also on this list. He is ranked fourth with 353 rating points. At the same time, Ben Stokes from England is in third place with 377 rating points. Bangladesh's Shakib Al Hasan is at number 5.

Congrats @BLACKCAPS on winning the #WTC21. You were the superior team.#TeamIndia will be disappointed with their performance.

As I had mentioned the first 10 overs will be crucial & lost both Kohli & Pujara in the space of 10 balls & that put a lot of pressure on the team. pic.twitter.com/YVwnRGJXXr

Missed being 50-over champions 2 years ago in the same country, but winning the inaugural World test Championship in style, many congratulations @BLACKCAPS , absolutely worthy champions. Happy for Kane Williamson and @RossLTaylor #INDvNZ pic.twitter.com/TNnkLvaMsO

To Kane and all of the boys.
We love you ️

Congratulations @BLACKCAPS on being deserving champions. NZ bowlers were terrific, Williamson & Taylor brought in their experience to finish the job.
Indian batsman will rue not playing to potential in 2nd inngs,but India can be proud of the way they played the WTC cycle #IndvNZ pic.twitter.com/rQdVosk2g3

Really happy for the @BLACKCAPS. They stayed on top throughout the game. Their bowlers were outstanding especially Kyle Jamieson! Well fought to @imVkohli and his men too, it was an engrossing battle. NZ continues to be the bogey team for India at ICC events.. #WTCFinal pic.twitter.com/YrMdegu2e4