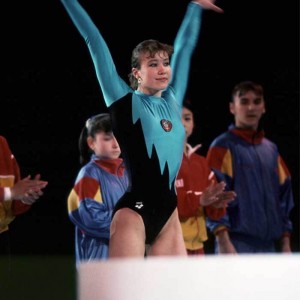 Famously known as the Belarusian Swan for her grace, Svetlana Leonidovna Boginskaya is a former artistic gymnast who has represented the Soviet Union and Belarus in the competitions.

Born on 9th February 1973 in Minsk, Svetlana took up figure skating before opting for gymnastics at the age of six. She did her initial full-time training in Moscow, and by the age of 14, she became a part of the Soviet national team. She bagged her first international medal in 1987 and went on to gain numerous achievements in her career.

Svetlana’s graceful performances helped her in gaining the title of the Goddess of Gymnastics. She was widely recognised for her long lines, balletic grace and the artistry she used to display on floor exercise. Svetlana is among those female gymnasts who have competed in three Olympic Games, but due to the break-up of the Soviet Union, she had to represent different teams in every edition – the Soviet Union, CIS (Unified Team) and Belarus.

After gaining innumerable achievements, she announced her retirement in 1992 but made a comeback in 1995, taking inspiration from the figure skater Katarina Witt who made an impressive comeback at the 1994 Winter Olympics. She participated in the 1995 European Championships and 1996 Olympics before retiring finally.

Svetlana was inducted into the International Gymnastics Hall of Fame in 2005. She now resides in Houston, Texas, with her husband and kids and runs two businesses, a summer camp for gymnastics students and an online gymnastics apparel business.

Have a look at some of her major career achievements: