“When your resolve to succeed is unshakable, no 'odds' can stand between you and your success.”

This quote stands well when speaking about India’s first woman to bag a Paralympic medal - Deepa Malik. She is the lady who has never bowed down her head in front of adversity and fought against all the odds of life. She entered the field of sports and decided to build her career in this at the age of thirty-six. Deepa Malik had scripted her name in the history of sports by bagging a silver medal at the Rio Olympics in 2016 in the women’s shot-put F-53 event with her lifetime personal best performance of 4.61 meters (461 cms.)

Other than a Para- athlete, she is also a daring biker, efficient swimmer, car rallyist, social activist, motivational speaker, a successful entrepreneur and a member of Bharatiya Janata Party (“BJP”). She has excelled in all such fields in which she has taken interest, becoming more and more humble with each accomplishment instead of bragging about them. 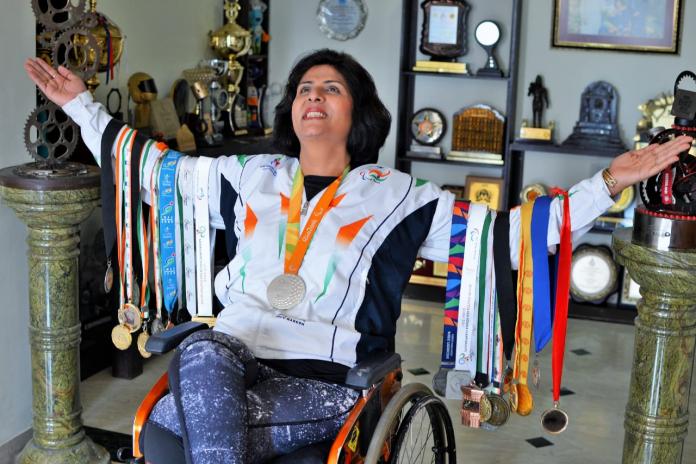 "In every arena of life - be it as an athlete, as an entrepreneur or as a social activist - I have strived to serve the tricolor.
I will continue to devote myself to the people with the same zeal and energy. It has been an honor and a privilege to serve and represent India and I would love to continue doing that."

Ms. Deepa Malik was born to Colonel Bal Krishan Nagpal, who served as a Military Personnel and Veena Nagpal. She lived with her parents and brother, Vikram Nagpal.

Being from an army background, Deepa was very active in sports and played all the games that fascinated her. She was a Kendriya Vidyalaya student in Calcutta and had graduated in English Literature from Sophia College at Ajmer. Life was at its best. She got married to Colonel Bikram Singh, Indian army personnel on 27 June, 1989. She gave birth to two lovely daughters - Ambika and Devika. Everything was going on well but what we say is fate that completely switches off your life to the downturns of empathy. 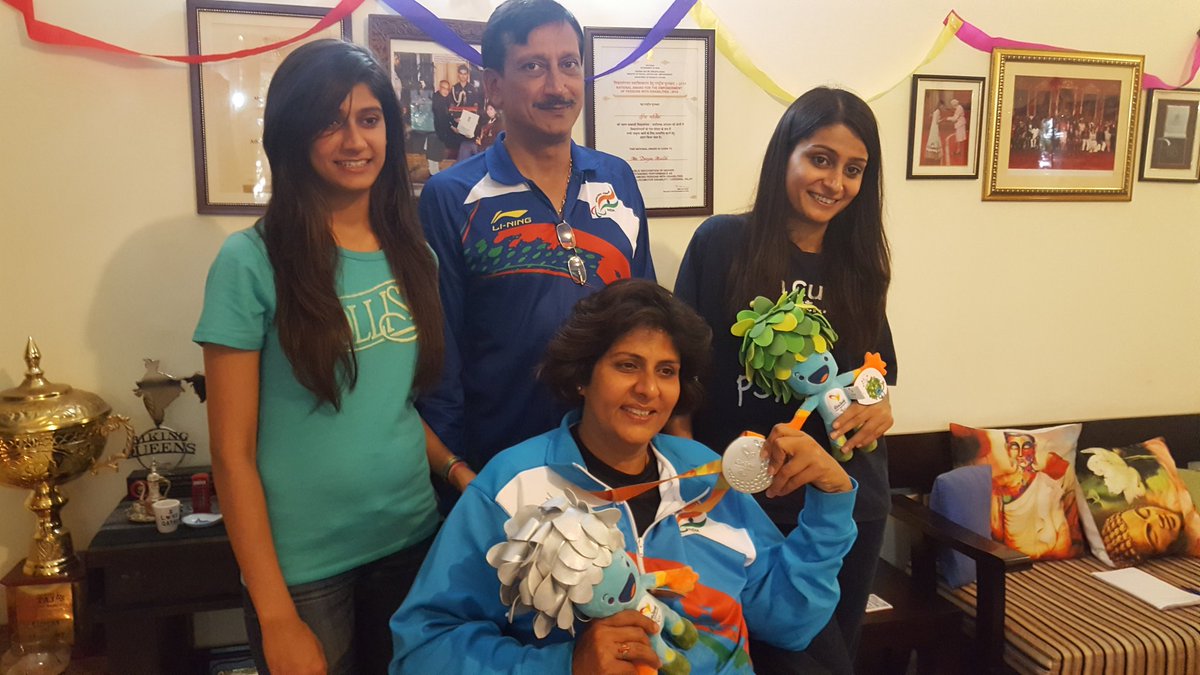 Deepa was detected with a spinal tumor at the age of five years, which further lead her to undergo treatment for three years. Finally, after three years of treatment, it got cured. But, later on in 1999 she was again diagnosed with spinal tumor, which made her undergo surgery. She went through three surgeries with 183 stitches between her shoulder blades in total that ended up paralyzing her lower body.

"It took long time to adjust to my body and its problems. I had to spend almost two years learning how to sit and walk. I hate sympathy, and I didn't want people think me of a weak and helpless person."

A tumor made her body below the chest paralyzed, but that was when the story of a champion began. Instead of weeping at her wounds, Deepa made her firm way to prove to the world that she lost nothing.

“My journey in sports was difficult. Especially because I came from a very different background from others. I was 36 when I started my career in sports so there was obviously an age gap. Of course funds and infrastructure are an issue when it comes to Para sports but above that fitting in was also a big challenge for me since most of the athletes came from different social backgrounds. The majority of them are from rural areas and here I was from an urban family.”

Being the daughter and wife of an Army man, Deepa adopted the qualities of enduring pain and still being strong against all the odds. Of course, her family and dear ones played a crucial role in making her more focused on abilities than disabilities that lead Deepa to not only become the hero of her life, but others as well. 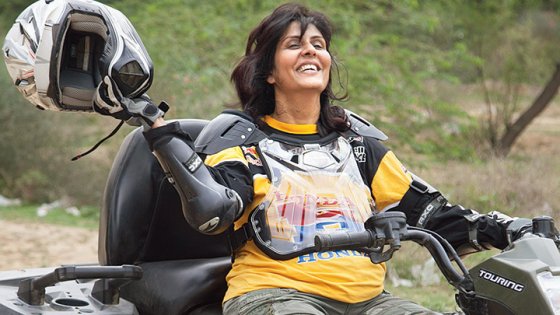 Being a huge fan of biking, Deepa joined the Himalayan Motorsports Association and surprised everyone with victorious 1,700 km bike ride to 18,000 feet in sub-zero temperatures. She is the first person to receive license for a modified rally vehicle and also the first physically challenged person to receive the rally license from the Federation Motor Sports Club of India (FMSCI). Post that; she also became the navigator and driver of the Raid-de-HIMALAYA 2009 and Desert Storm 2010 that are regarded as the toughest car rallies of the nation. 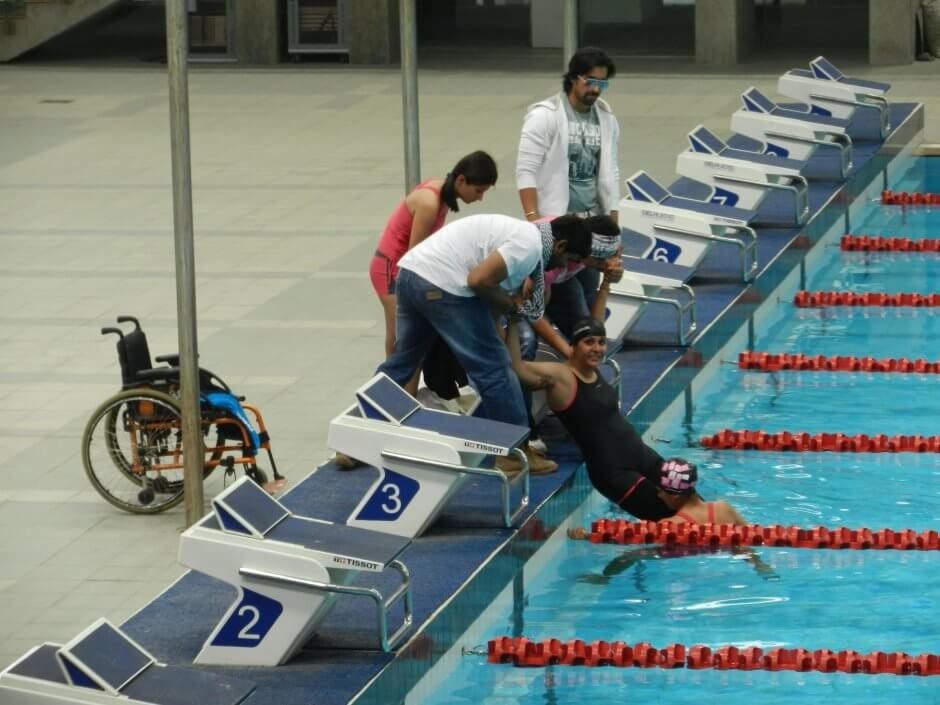 To make her arms and shoulders strong, she started swimming.  But after watching her supersonic speed in spite of her paraplegic state, Deepa was suggested by her trainers to participate at national level swimming events.  She bravely accepted and proved the world that disability is only a state of mind. It was extremely hard to believe for everyone that a lady with a paralyzed body, successfully crossed the stretch of 1 km of Yamuna river with an upstream flow in 2008 and became the first paraplegic woman to cross the highest motorable pass of the world.

Before switching to Para athletics in 2009 she practiced Para swimming. Even her family and trainers were so shell-shocked watching her perform like a normal person although her body trunk below the chest is numb. She was 36 by that time, rejecting failure at every step of her adventurous journey. Deepa was in the midst of her life when she rolled up her sleeves for the big moves, the time when athletes think of retirement.

"I shut down my restaurant business near Ahmednagar, Maharashtra to shift to Delhi to pursue field sports."

When she was asked as to why she chose to switch to athletics; she said that this sport motivated her to overcome her impairment and break negative stereotypes.

Deepa finally made her way to the Olympics and became India’s first woman to bag a silver medal in the Paralympics in 2016 by showing her knack as a shot putter. Until then, Deepa had clinched around 54 national medals with her astounding and jaw-dropping performances as swimmer, shot-putter, javelin thrower and the first biker of her kind.

“Pursuing sports has given me a new identity. I was tired of people looking at me with sympathy. I wanted to prove a point that not being able to walk does not change anything. I am still alive and kicking. All these awards and recognitions have helped me to erase that ‘disability’ part from my personality.” 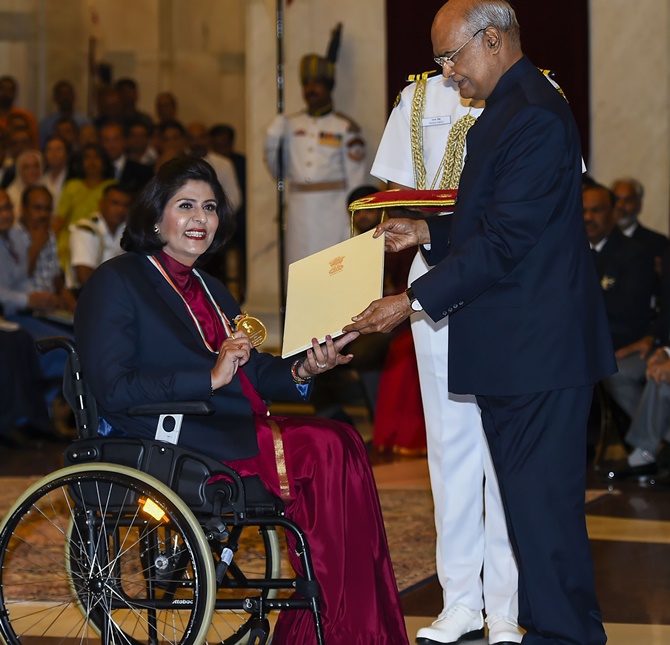 The Government of India appreciated her exuberance and aplomb by bestowing the highest sporting honor of the nation “Arjuna Award” in 2012 for her outstanding performance in swimming. With a brave heart, Deepa covered the regions on her special bike where normal people find hard to go. Deepa is the only Indian woman to earn qualification for IPC World Athletics Championship in 2013 in Lyon. She was bestowed with the prestigious "Padma Shri Award" in 2017 for her achievements and was named as 2018 Para Athlete of the year at the Sport Star Aces Awards ceremony. In 2019 she was honored with the Rajiv Gandhi Khel Ratna Award (Renamed as Major Dhyan Chand Khel Ratna Award) in India and also received the New Zealand Prime Minister’s Sir Edmund Hillary Fellowship. In the same year she was a recipient of the International Women’s Day Recognition held by the International Paralympic Committee (“IPC”). 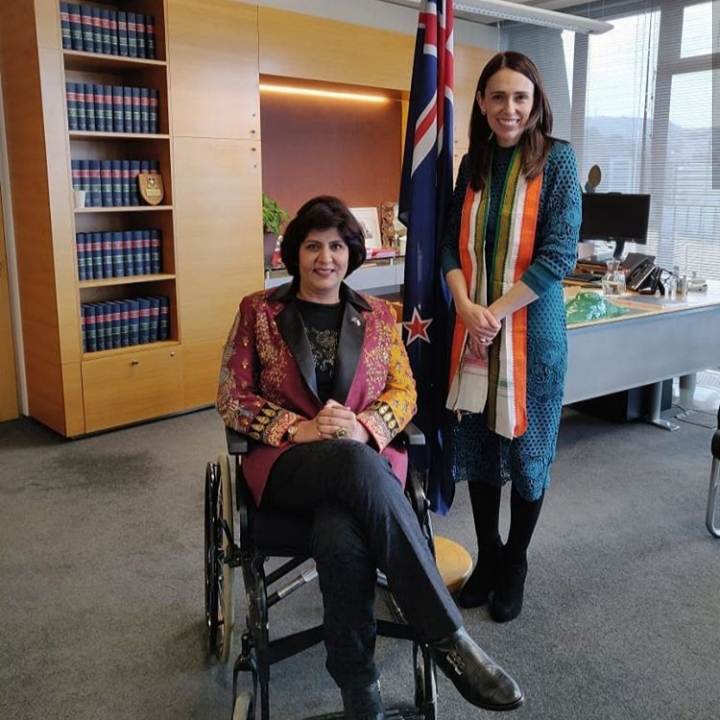 Deepa Malik has immensely contributed towards the betterment of sports for physically challenged as a member of the Working Group for the Formulation of 12th Five Year Plan (2012- 2017). She is also the brand ambassador of “Clean India” for New Delhi Municipal Corporation and an expert consultant for Disability Inclusive Accessible Infrastructure for Ministry of Housing and Urban Affairs ‘Smart Cities’ project.

In September 2019, she retired from the competitive field in order to run for the presidency of the Paralympic Committee of India (“PCI”), a post for which she was elected in January 2020.

"I have no regrets at all. I have been a rebel all my life and did what I wanted. I am happy with what I have achieved. I gave my country twenty three international medals. I am happy. Sports for me were a tool to create awareness that you can do whatever you want, and the physical disabilities do not mean anything. I did my best, broke records in whatever I did and took India to greater heights. Now I want to do that as an administrator."

At, present Deepa Malik (the Founder of Wheeling Happiness Foundation) helps her daughter Devika (Paralympic gold medalist) at the foundation that aims to help people with impairments and barrier- free lives by providing medical equipment and financial support. In spite of all odds, Deepa Malik stands out as an example to the world, excelling in every niche she stepped in, without letting her disability deter her way to success. It is hard to imagine a lady confined on a wheelchair to achieve success streaks like Deepa Malik did without any doubt.

“Just because we treated it right, with happiness and positivity, disability has given us abundance in return. I'm so happy that I could pass it on, that it's all right to be different. We are all different, but [it's] what we make of ourselves.”