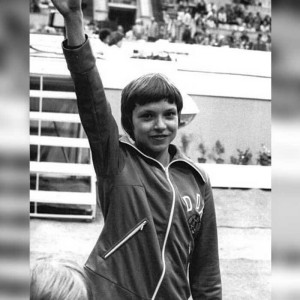 One of the most successful female German gymnasts, Maxi Gnauck is a retired artistic gymnast from East Germany. Born on 10th October 1964 in Berlin, Maxi took up gymnastics at the age of five and won her first medal at the mere age of eight. Her first international success came at the age of 13.

Maxi was one of the first girls to perform a triple twist on the floor event. She is perceived as one of the best uneven bars performers of all time and was an exceptional tumbler as well. She has an impressive record at the World and European Championships, where she bagged five titles in each. In her only Olympic appearance, she bagged four medals and led her national team to win the bronze medal. In the all-around final event, she had a tie with Nadia Comăneci.

Maxi announced her retirement in April 1986 and went for a four-year sports coaching course at Leipzig University. Working as an aide at a kids’ summer camp in 1988, she got severely injured, broke her C5 vertebra, and became almost paralysed. Later, three of her vertebrae were reinforced with a metal plate.

Due to the reunification of East and West Germany, she took initial coaching positions in South Africa and Great Britain temporarily, for a few months in 1990. Between 1993 and 2004, she worked as a full-time coach in Norderstedt, Germany, at the Harksheide Gymnastics Center. In 2005, she started working at the Artistic and Apparatus Gymnastics Center together with her former teammate Roland Brückner in Switzerland.

Here are some of her major career achievements: