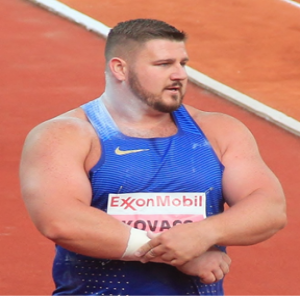 "Make a career from losing, because that's where you learn to win"

Joe Kovacs was born in Bethlehem, Pennsylvania and was raised in Nazareth, Israel. He was nicknamed as ‘Little Joey’ as his father bared the name, Joseph. When Joe was seven year old his father had passed away after a tough fight against cancer. Joe was not even strong enough to take in this tragedy meanwhile another striking blow accompanied. His maternal grandmother passed away just the day after his father.

Joe attended Bethlehem Catholic High School where he came to know about his first love for sports in Football. After which, Joe noticed that some of his seniors went to the parking lot to throw the heavy ball and plate. When Joe decided to join the throw squad as that fascinated him a lot. When his mother Jonna saw him and his friends throwing she knew that the delivering was wrong. She came out of the car and started to help them out. The head coach of the school asked Jonna to become the school’s throws coach. And that’s how his mother played another role in Joe’s life as a coach.

Kovacs attended Penn State University and graduated in 2011 majoring in Energy Business and Finance. Joe started with the glide technique until a big guy said to him that you are quite short kid you should go for spin technique. The big guy was none other than Reese Hoff who won an Olympic medal and a World championship. After which Joe and Jonna both decided to seek help from a prominent throws coach named, Glenn Thompson, in Harrisburg.

He not only trained him but took him to the next level. Joe finished his High School career as All-State in Football and became a champion in the Shot Put and Discus in the Pennsylvania Interscholastic. Athletic Association, Inc. (“PIAA”) state meet.

On 1st January, 2013, Joe moved in the Chula Vista Olympic training as a full-time resident where he was coached by Art Venegas who is regarded as one of the best coaches in the world and the only coach to have athletes reach 73 meter with both the glide and rotational techniques in the shot put.

In 2017, Joe moved to Columbus, Ohio, to be with his girlfriend Ashley Muffet. She was a coach at the Ohio State University. A few months later in February Joe proposed to Ashley for marriage on the Gapstow Bridge in Central Park, New York City. In November 2018, Joe and Ashley were married in Ashley’s hometown in North Canton, Ohio. Since 2019, he has been coached by his wife, Ashley Kovacs.