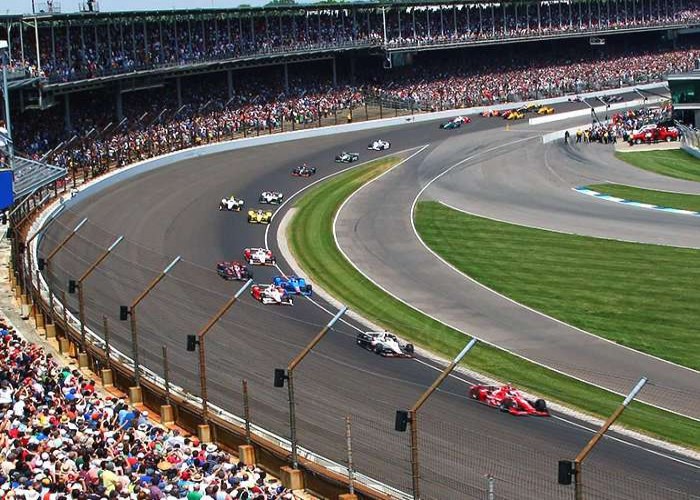 The Indianapolis Motor Speedway is an automobile racing circuit that is located near Speedway, Indiana, USA. This stadium is the home to Indianapolis 500, Verizon 200 and formerly was the home of the United States Grand Prix. The Indianapolis is the largest sports venue in the world.

This speedway is situated on the corner of 16th Street and Georgetown Road for approximately six miles (9.7 km) west of Downtown Indianapolis (It is a neighborhood area and the central business district of Indianapolis, Indiana, United States)

1) It was constructed in 1909 and is the second purpose-built, banked oval racing circuit after Brooklands.

2) It is also the first circuit to be called as a ‘speedway’.

3) Indianapolis Motor Speedway is the third-oldest permanent automobile race track in the world after Brooklands and Milwaukee Mile.

4) It is the highest – capacity sports venue in the world with a permanent seating of 257,325.

5) A significant event of the International Race of Champions (“IROC”) was held at the Indianapolis Motor Speedway in the year 1998.

6) The "One America 500 Festival Mini-Marathon" is a half marathon that has been hosted by the Indianapolis Motor Speedway since 1977.

8) The Speedway hosted the opening ceremonies and the speed roller skating competition of the 1987 Pan American Games.

9) It has also hosted the United States Auto Club quarter midget racing since 2009 which is more popular as "Battle at the Brickyard".

The Indianapolis Motor Speedway is the first race track to be named a speedway. An estimated amount of $3 million was spent on the construction work that commenced on 15th March, 1909.

A modern infield road course was added to the racetrack between the years 1998 and 2000. It incorporated the southern and western parts of the track, making it a bigger one. The Indianapolis Motor Speedway is the place where Indianapolis 500 and NASCAR's Brickyard 400 are held.

It was the envision of the Carl G. Fisher who was a business person in 1905 to think of having speedway after he assisted friends racing in France. He also saw Europe had upper hand in automobile design and craftsmanship.

In those days car racing were usually conducted in the horse race tracks and public roads. Fisher argued that these grounds were unsafe for sports car racing. Therefore, he proposed to build a circular track of 5 – 8 Km either 30 to 45 meters wide surface.

Fisher proclaimed by saying these lines:

He finally selected the Pressley Farm, totaling 328 acres outside Indianapolis. For building the Indianapolis Motor Speedway he also convinced James A. Allison (An American entrepreneur and businessman), Arthur C. Newby (An American businessman and pioneer of the bicycle and automotive industries in Indianapolis, Indiana) and Frank W. Wheeler (A Ship builder and Politician from the U.S state of Michigan). They purchased the property for 72,000 US dollars.

The group on 20th March, 1909 with capital of 250,000 US dollars incorporated the Indianapolis Motor Speedway Company. Construction began in 1909 of the stadium.

The track surface consisted of