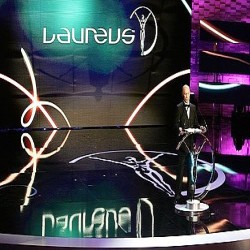 Famously known as the "The Sports Oscars", the Laureus World Sports Awards is a prestigious global sports awards ceremony which is held annually at various locations around the globe to honour the most remarkable individuals and achievements of the year from the sporting landscape.

The awards were established by the founding patrons (Daimler & Richemont) of the Laureus Sport for Good Foundation in 1999, and are supported by its partners Mercedes-Benz and IWC Schaffhausen. The aim of Laureus Sport for Good is to use the power of sports to end violence, discrimination & disadvantage in order to prove that sports have the potential to make a difference in the world.

The final award winners are selected by a voting process conducted amongst the members of the Laureus World Sports Academy consisting of all the giants of the global sport. A Laureus statuette, crafted by Cartier is presented to each of the winners.

Laureus World Sportsman of the Year

This is an accolade presented to the sportsman who has shown the excellent athletic performances and achievements throughout the year including major championships titles and the world records.

Laureus World Sportswoman of the Year

It is awarded to the sportswoman who has best demonstrated the sporting performances and achievements throughout the year by winning notable titles and by breaking world records.

Laureus World Team of the Year

This award is presented to a sports team (representing a country, province, county, state or a club) who has made notable achievements throughout the year at international level by winning most of the championships and titles.

Laureus World Comeback of the Year

This is an honour bestowed on a sportsperson or a team who has shown remarkable performances by overcoming injuries, illness, failure or adversity and made a victory in the sporting arena.

Laureus World Breakthrough of the Year

Laureus Breakthrough of the Year is awarded to the most promising and emerging newcomer athlete or to an established sportsperson who has shown a considerably higher level of sporting achievement and a significant step-up in class.

This is one of the special Laureus Awards which is awarded to the sportsman or sportswoman who has shown supremely outstanding performance in action sports by devising and executing new tricks and techniques in competitions and winning international championships or breaking records.

Laureus World Sportsperson of the Year with a Disability

This is a special honour presented by Laureus to a specially-abled athlete who shows exemplary sporting achievements in any sporting discipline in the Paralympic events.

Laureus Sporting Moment of the Year