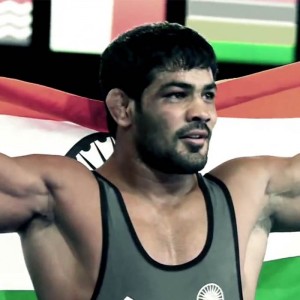 In an era when the youth was completely submerged in the craze of cricket and football, there was a boy who decided to bring medals for the nation in wrestling and replicated history by clinching Olympic medals for India since the impressive victory of Khashaba Dadasaheb Jadhav in 1952. He has set a benchmark for the youth in wrestling, and it was then Indians started trying hands in wrestling once again with all passion and enthusiasm. He is the first Indian to bag two Olympic medals for the nation in freestyle wrestling. But as we all know that success stories are created with hard work, sweat and blood, Sushil too had to face many thick and thins of life. Before bagging an Olympic medal, no one recognised him inspite of his national and state-level victories and he had to go on practising even in a phase when he didn’t even have the proper equipment, training facilities and guidance. But, he eventually fulfilled his dreams to become an international wrestler and today, the world appreciates him for his astounding performances at major stages.

Born in Baprola village near Najafgarh (South West Delhi), Sushil was raised in a devoted Hindu Jaat family led by his father who was a driver in MTNL Delhi and mother Kamla Devi, a housewife. Being inspired by his father and cousin Sandeep for wrestling, Sushil started learning Pehlwani at the akhada of Chhatrasal Stadium at the age of 14 by Yashvir and Ramphal and meanwhile completed his graduation (B.P.E.) and post-graduation (M.P.E.) from Noida College of Physical Education. But it was not until he met former wrestler and Coach Satpal Singh, Sushil recognised his potentials in freestyle wrestling. He started learning under the tutelage of Guru Satpal and burst out into the international scene by winning a gold medal at the World Cadet Games in 1998.

After two years, Kumar bagged gold at the Asian Junior Championship and determined his way to becoming an international freestyle wrestler. Where other international athletes had their own equipment and training facilities, Kumar had to struggle with whatever he could do by himself and support of his Guru Satpal. Being a pure vegan, he couldn’t eat flesh which is a usual dose for wrestlers and his family supported him for his dreams by sending him tinned milk, Ghee and fresh vegetables so that he had not to rely on mess meal only. But what made him unique was that he never thought of quitting his dreams in lack of facilities. Instead, he toiled hard to earn success and eventually awarded victory in the year 2003 by dominating the Commonwealth Wrestling Championships and also won a bronze at the Asian Wrestling Championship. He also spotted the fourth position at the World Championship which was not recognised much by the media, but Kumar was chasing only a single dream which was to bag an Olympic medal for the nation. He bagged another gold medal at the Commonwealth Wrestling Championship in 2005 and replicated the success in 2007 after which he never looked back but to the aim. The following year came with an opportunity for Kumar to represent his nation at the Olympics and there he banged on. Initially, it was tough to say that he could advance to the medal match as he lost to Andriy Stadnik in the first round of 66 kg category and had been put on repechage. Kumar fought hard with both repechage round beating his opponents Doug Schwab and Albert Batyrov and finally dominated the bronze medal match defeating Leonid Spiridonov by 3:1. Kumar concluded after his Olympic feat that during all his three bouts for the Olympic medal, he didn’t have a masseur but his team manager Kartar Singh (former Asian Games medalist) played a crucial role for him and gave him massage to get back to his norm. It was a proud moment for India as after a long span an Indian wrestler brought home an Olympic medal.

In 2010, Kumar competed at the World Wrestling Championship, held in Moscow and won India’s first world title in wrestling by defeating Russian wrestler Alan Gogaev by 3-1 in the finals. The same year, he also competed at the Commonwealth Games and made everyone shell-shocked with his unfazed and undeterred performance. In the quarterfinals, he defeated Muhammad Salman by 10-0 in 46 seconds and advanced to the semi-finals where he won over Famara Jarjou within 9 seconds and finally dominated the 66 kg category defeating Heinrich Barnes by 7-0. With this feat, Kumar showed that if one has an attitude to beat the odds, success is inevitable. At the opening ceremony of the London Olympics in 2012, Kumar represented the nation by bearing the Indian flag. He earned a silver medal in the 66 kg category which was India’s third Olympic medal in wrestling. Post two years, he went one up on his previous performance by clinching a gold medal at the Commonwealth Games but this time in 74 kg category and that too in 107 seconds by a fall (position). After a span of four years, Kumar again vindicated his claim on the gold medal after a hard-fought summit clash in 74 kg category defeating Johannes Botha of South Africa and thus created a stack of 3 Commonwealth gold medals through his sturdy performances at three consecutive Games.

With a vision to encourage his sport in the nation, he never missed any chance to support and guide young athletes. He refused to appear in any surrogate ads with a belief to encourage things that are beneficial for the society. He has always been considered as an inspiration and ideal by the young wrestlers who have started bringing medals for the nation at various international stages. With the support of the Government of Haryana state, Sushil fulfilled his dream of opening a wrestling academy in Sonipat to polish the young talents. Sushil’s efforts to uplift the stature of India in wrestling have proved to be worth and were much appreciated by the Government of India that awarded him with the Arjuna award, Rajiv Gandhi Khel Ratna Award and the civilian honour Padma Shri. He is still giving his best in his realm, being a role model for the future of wrestling.