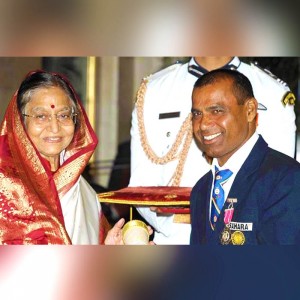 This story is all about the first Olympic archer of India - Limba Ram. The man who added numerous medals in the Indian tally and trained many of the aspiring archers to go for glories. Limba Ram is amongst the prominent Indian archers who have given the best archery performances at various international events and has represented India at three Olympics. He has been counted amongst the most celebrated archers of India. But, the agony is that only a few know about this legendary archer and his notable contribution to improve the stature of Indian Archery at world stages.

Born on 30th January 1972 in Rajasthan in the Ahari tribal family, Limba's childhood was full of struggles, earning the daily bread and butter. Initially, he used to hunt sparrows, partridges as well as other animals with his self-made bamboo bow. That was what made him an accurate archer with the hardest equipment. In 1987, at the age of 15, Limba's talent was recognised by the selectors' team of the Sports Authority of India (SAI). At that time, the SAI team was conducting trials in the nearby village, and after identifying Limba's potentials, they sent him to Delhi for the Special Area Games Programme along with three other boys including Shyam Lal (another prominent archer of India). There, he learned under the tutelage of R. S. Sodhi.

Acing the World of Archery

The archer soon hit his stride and burst into the international scene through his prowling performances. The stardom came to Limba when he became the overall champion of the National Junior Level Archery Tournament that took place in Bangalore. In 1989, Limba went one up on his performance in the World Archery Championship and reached to the quarterfinals. The same year, he represented India at the Archery Asian Cup and bagged a gold and a silver medal in men's team and individual event, respectively. The following year, Limba gave an eye-catching performance at the Asian Games that was held in Beijing and helped India to earn the fourth position.

Limba's sincere efforts in archery were honoured when he received the Arjuna Award by the Government of India in 1991. The next year, he dished out a clinical performance at the Asian Archery Championship men's individual 30 metres event, equaling the world record of Takayoshi Matsushita with a score of 357/360 to bag the gold medal. The same year, he spotted the 10th rank at the Barcelona Olympics.

At the Commonwealth Archery Championship of 1995 that held in Delhi, Limba bagged a silver medal in men's individual and gave his crucial participation to the men's team to clinch the gold medal. In 1996, he became the National Champion with an Asian record. The same year, he encountered a severe shoulder injury while playing football in Kolkata. With this injury, it was almost unbearable to lift up the bow and aim the target for a span of years yet, he participated at the national ranking archery tournament of Sports Authority of India in 2003 and finished at the 16th position. Limba's injury dominated his sports career, and he had to quit as a player. But, that wasn't the end, he started training the youth for bigger stages.

Coaching the Future of Archery

Limba was appointed as the Chief Archery Coach of Rajasthan in 2007. He was also elected as the National Archery Coach for the Commonwealth Games 2010. The Indian archers did very well and concluded the Games with 3 gold, 1 silver and 3 bronze medals. He continued coaching for the Asian Games where his students bagged a silver and 2 bronze medals. The next target was to bag the Olympic medals, but the destiny didn't favour this time and Limba resigned from his post. In 2012, the Government of India bestowed him with the Indian civilian honour Padma Shri for his astounding efforts for the encouragement of sports in the nation. After a few years, Limba was diagnosed with a neurodegenerative condition and was hospitalised.
The story which began with the bamboo bow and reed arrows, ended up in the urge of support when required the most. Limba has dedicated the major part of his life to his passion and even raised numerous potential archers under his tutelage, but the nation is still unaware of his efforts and contributions. Hope, Limba may receive his much deserving support and recognition by the present generation and give his worth guidance to them to go for their dreams, no matter how hard the storms of life may get.