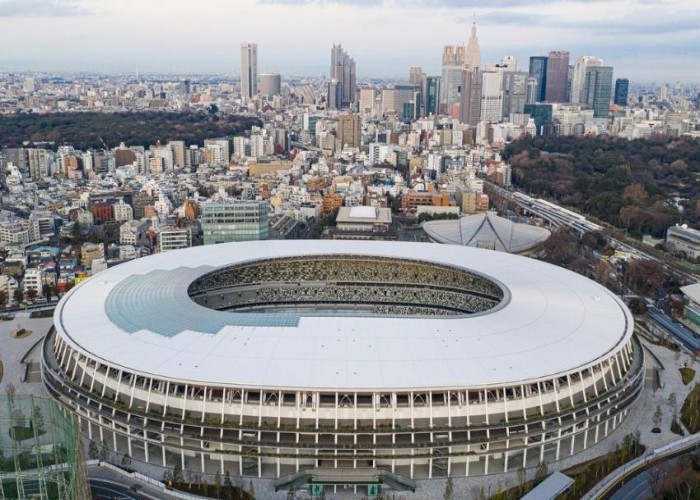 The Japan National Stadium, formerly known as New National Stadium of Tokyo, is a multi-purpose stadium used mostly for association football and was built especially for the 2020 Tokyo Olympics and the Paralympics with grass surface and was known as the Olympic Stadium in 2021.

It was selected to serve as host for the opening and closing ceremony of the 2020 Summer Olympics and Paralympics in 2021 Games, as well as the venue for track and field athletics events.

The old national stadium was completely demolished in May 2015, and the new construction began in December 2016. The construction cost to rebuild the entire stadium in the new standard format is estimated up to US$ 1.26 billion.

Initial plans to build a new stadium were cancelled in July 2015 by Japanese Prime Minister “Shinzo Abe”, who announced a reapplication following public outcry over the increase in construction costs. As a result, the new design wasn't ready for the 2019 Rugby World Cup as originally intended.

Finally the new design created by architect “Kengo Kuma” was chosen in December 2015 to replace the original design and was completed on 30th November 2019.

In February 2012, it was confirmed that the stadium would be demolished and reconstructed. In November 2012, the new national stadium design was based on the design made by architect Zaha Hadid (A British-Iraqi architect, artist and designer). The new stadium was a venue for athletics, rugby, and football and was also used for the opening and closing ceremonies of the Olympics and Paralympics. The new stadium had been scheduled to be completed by March 2019.

The Japanese government announced various changes in the Hadid’s design in May 2015, citing budget constraints including the cancelling plans to build a retractable roof (It is a roof designed to roll back the roof of a structure so that the interior of the facility is open to the outdoors) and converting some permanent seating to temporary seating. Even the site area was also reduced from 71 acres (290,000 square meter) to 52 acres (210,000 square meter). Many prominent Japanese architects, including Toyo Ito (A Japanese architect known for creating conceptual architectural, in which he seeks to simultaneously express the physical and virtual worlds.) and Fumihiko Maki (Japanese architect who received the Pritzker Prize for his work, that often explores pioneering uses of new materials and fuses the cultures of east and west.) not only criticized the stadium design by referring it to a turtle by Ito and white elephant by Maki.

As of 2015, Zahib was unable to find a Japanese contractor willing to work with her design that further led her to resubmit her revised design in the new competition. On 21 December 2015, the Japan Council announced that Kuma and the Teisei Corporation had been selected to design and construct the National Olympic Stadium.

The construction of stadium started in December 2016 and was decided to wind up the work till 30 November 2019 so that the stadium could be handed over to International Olympic Committee (“IOC”) for further necessary games and ceremony preparations, including test events.

The new design had a seating of 68,089 in athletics mode and with temporary seating over the permanent track up to an increased capacity of 80,016.

The inauguration of the stadium took place on 21 December 2019 with a special ceremony. The stadium’s inaugural sporting event was the 2019 Emperor’s Cup Final in which the Vissel Kobe (A Japanese professional football club based in Kobe, Hyogo Prefecture) won their first ever trophy.

It was even announced that the stadium is currently bidding for hosting the 2025 World Athletics Championships.

The stadium structure is made up of timber as a major component and is all sourced from Japan in order to reduce environmental impact. Most of the wooden elements are in modular form such that it can be replaced when the timber deteriorates.

The exterior of the new National Stadium integrates Japanese-ness with multilayered "eaves”. The stadium height is minimized and the eaves are vegetated with native species. The design of the eaves (They are the edges of the roof that overhang the face of a wall and normally project beyond the side of a building) is inspired by the Hōryū-ji (It is a Buddist temple that was once one of the powerful Seven Great Temples) and the incorporate air spaces are used for ventilation in the interior space.

More than 450 places are there for wheelchair users and toilets with latest technology are available.