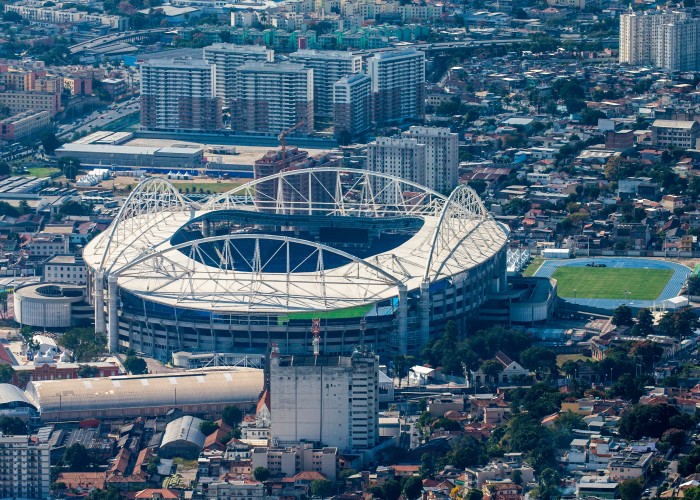 The first event, Campeonato Brasileiro Série A, was held on 30th June, 2007, between Botafago Club and Fluminense Club. Botafago won the inaugural match with a score of 2-1 against Fluminense and were awarded with the João Havelange Trophy.

The stadium has hosted the 2007 Pan American Games and also the 2016 Summer Olympics and 2016 Paralympics games.

Moreover, it was one of the five venues for the 2021 Copa America.

Botafogo de Futebol e Regatas also known as Botafogo is a Brazilian football club that has made this stadium its home ground since the year 2007 along with the Brazilian National Football Team.

The stadium has capacity to hold approximately 45,000 spectators but in the 2016 Summer Olympics and Paralympics, the capacity was expanded to host 60,000 spectators.

Botafogo de Futebol e Regatas club is the operator of the arena and Prefeitura do Rio de Janeiro is the owner of the Estadio Olimpico Nilton Santos.

In 2013, the structural issues caused the stadium to be closed for repair and redevelopment. Thereafter, it was again reopened in the year 2016. The size of the arena’s field is 105 m (344 ft.) in length and 68 m (223 ft.) in width. The stadium has been a major ground for football.

Capacity of the Arena

There are nearly 45,217 Bleachers (tier of plastic seats) with 21,549 in the upper ring in the east and west of the stadium and 23,668 in the lower ring. Tribunes, boxes and east central area are equipped with 1,364 seats. Estadio Nilton Santos can also accommodate wheelchair users with up to 250 seats.

Inside of the Stadium

There are sixteen Radio stations and four TV screens (two electronic scoreboards and two projection screens) in the stadium. It is equipped with sixty toilets and twenty two bars for the public.

There are nine running tracks and the ground in the middle of the stadium is covered with natural grass for Pole vault, Shot Put, Discus throw, Hammer throw, Javelin throw and Soccer. There are two sectors for Triple Jump and High Jump along with track darts.