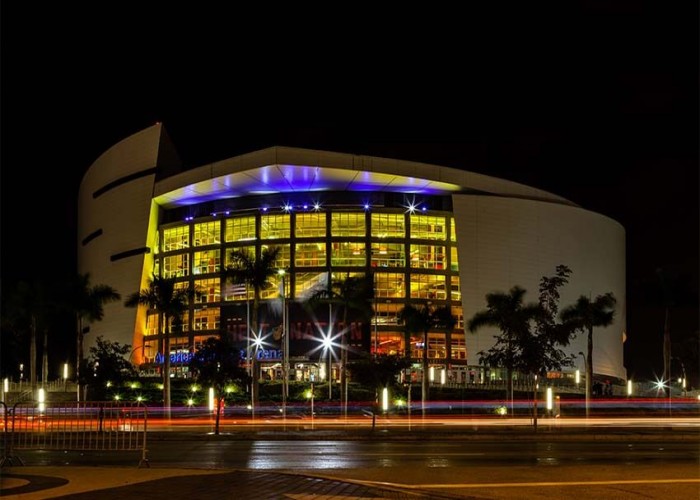 2) Florida’s largest theater that is the Waterfront Theater is also housed within the arena and has the seating capacity of 3,000 to 5,800 seats.

3) The Theater can be used for concerts, family events, musical theater and other stage performances.

4) American Airlines has a hub at Miami International Airport that maintains the AFTX Arena Travel center at the venue.

6) The NBA approved the deal in April. The FTX Arena was fully adopted in June 2021.

The arena opened as the American Airlines Arena on December 31, 1999 and its construction cost was $213 million. As a stadium sponsor, they painted the giant aircraft on the stadium’s roof. The arena is also provided with luxurious skyboxes known as Flagship Lounges”.

The opening of the arena took place with a concert by Gloria Estefan. On January 2nd, 2000, the Miami Heat defeated the Orlando Magic by 111-103 in a National Basketball Association event held after two days of the venue's inauguration, i.e., on December 31st, 1999.

American Airlines Arena is also referred to as the "Triple-A" by some sports casting news channels, and some sports reporters refer to FTX Arena as “A3” (A cubed). FTX Arena stadium is famous for its unusual scoreboard, designed by Christopher Jenny.

The arena's capacity can exceed up to 19,146 spectators depending on the type of stage concert. With a construction cost of over 357 million dollars, the Arquitectonica or the Heinlein Schrock Stearns (as they were known formerly) built the stadium to hold over 19,600 spectators for a basketball match. In addition, the center stage location can hold more than 20,000 audiences for a 360° show.

The American Airlines Arena has hosted the National Basketball Association finals in 2006, 2011, 2012, 2013, and 2014. The arena sits on 38 million dollars of county land. The Miami-Dade Commissioner Katy Sorenson, who also opposed the arena in 1996, said that the arena's construction was not a good deal for the county.

The arena even hosted the World Championship Wrestling, Inc. (“WCW”) sixth and final uncensored pay-per-view in 2000. The Royal Rumble in 2006, Survivor Series in 2007 and 2010 and Hell in a Cell in 2013 were the four major World Wrestling Entertainment Inc. (“WWE”) pay-per-view events that were held in the arena.

The Transportation to the arena is easy and not much time consuming as the visitors are encouraged to take Metrorail, Metro mover or Metrobus, as the parking can be a little expensive. The Metro mover’s Freedom Tower Station is just two blocks away that is west of the arena. The nearest Metrorail stations are Government Center and Historic Overtown. Moreover, the Metromover is free to ride and connects to Metrorail at Government center station.

The arena features 939 parking spaces, with those spaces that are reserved for the premium seat and the ParkJockey (An American parking revenue and access control startup) manages the on-site parking of the arenas.