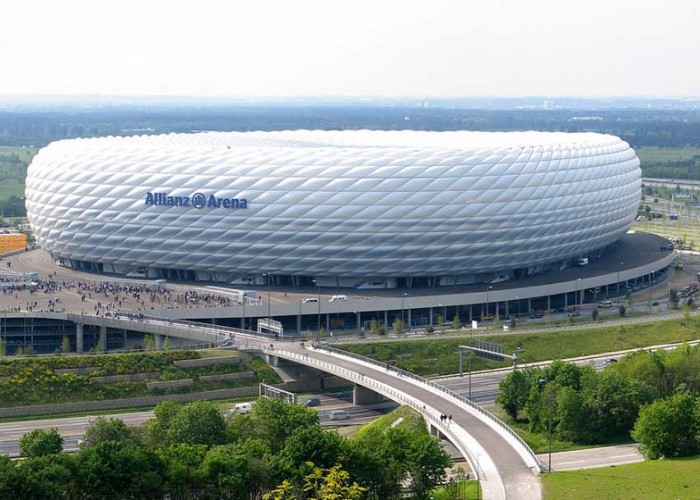 The significant financial service provider Allianz acquired the naming rights for the stadium for 30 years. However, this name cannot be used when hosting FIFA and UEFA events. These governing bodies prohibit sponsoring companies that are not official tournament partners. The stadium was referred to as the FIFA World Cup stadium during Munich's 2006 FIFA World Cup. In Union of European Football Associations (“UEFA”) club and Nations League games, the stadium is known as the Football Arena Munich and hosted the 2012 UEFA Champions League final and is about to host the upcoming 2025 final, that was moved from 2023.

Moreover, on 9th February 2022 it was announced that the Allianz Arena will host a regular-season game of the 2022 NFL Season as a part of the NFL International Series. This will be the first ever National Football League game played in Germany.

The construction of the Allianz Arena Stadium began with the proposition of being voted to build a new stadium after architect Günther Behnisch refused to redesign and reconstruct the Olympiastadion München. The voting went with 2/3rd in favor of the new stadium's construction for tournaments of national and international level. The stadium got designed by the Swiss architect firm Herzog & de Meuron Basel Ltd.

This stadium has a capacity of nearly 75,024 for domestic tournaments with standing area of total 15,794 (9,136 in the South and 6,658 in the North Stands) and for international tournaments with 70,000 seating capacity (no standing areas). The seating arrangement includes 2,152 business seats, 106 VIP boxes of various sizes accommodating 1,368 guests, Press Club with 300 seats and 227 special seats for the disabled at the main entrance / exterior ground level.

The stadium was constructed with a parking area known to be the largest of Europe's parking structures. The stadium provides four-storey parking garages with at least 9,800 parking slots, along with 1,200 parking places built into two tiers of the arena. The stadium can hold 350 coach places, and 150 parking spots are reserved for specially-abled people.

The stadium construction began on 21st October 2002 and was officially opened on 30th May 2005. The stadium is designed such that the main entrance to the stadium would be from an elevated esplanade separated from the parking space consisting of Europe’s biggest underground parking. Moreover, the roof of the stadium has built-in roller blinds which may be drawn back and forth during games to provide protection from the sun.

The firm also brought the concept of building the exterior with ETFE-foil panels that can be lit from inside and are self-cleaning. Due to the construction of this stadium, the government has made significant changes to the city's infrastructure as well.

The impressive facade consists of 2,784 inflatable ETFE plastic panels. Each of panel illuminates in red, blue or white color. Red is for Bayern Munich, blue for the TSV 1860 and white for the games of the German national team. The Stadium is known for its exterior made from inflated ETFE panels, it is the first stadium globally with a color-changing surface.