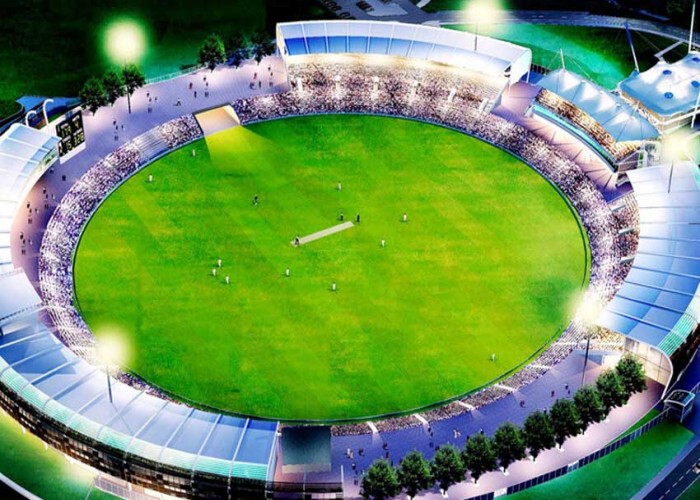 The Rose Bowl formerly known as Ageas Bowl is a cricket ground and hotel complex in West End, Hampshire, England. Since 2001, it has been the home of Hampshire Country Cricket Club.

It was constructed as a replacement for Hampshire’s homes such as the County Ground in Southampton and also the United Services Recreation Ground in Portsmouth since 1882. Hampshire had played their inaugural match at the ground against Worcestershire (One of the eighteen first-class county clubs within the domestic cricket structure of England and Wales) from 9-11 May 2001 in which Hampshire won by 124 runs.

Since, then the ground has hosted international cricket, including One Day Internationals, 2004 Champions Trophy, 2 Twenty20 Internationals, and Test matches in 2011, 2014, and 2018. In these matches, England played against Sri Lanka and India. In 2020 the Ageas Bowl was used as two biosecure venues alongside Old Trafford for the tour of West Indies, Pakistan, and Ireland during the COVID-19 Pandemic.

The ground underwent a redevelopment that started in 2008 in order to host the Test cricket to make the ground more viable and to increase capacity. In 2015, a four-star Hilton Hotel with an integrated media center was opened in the overlooking of the ground.

The Rose Bowl hosted the 2019-2021 ICC World Test Championship final between India and New Zealand. As a result, new Zealand has been crowned World Test Champions. Moreover, during the ICC Tournaments, the ground is referred to as the Hampshire Bowl due to sponsor’s names not being allowed. In addition, the Rose Bowl became home to Southern Vipers, a Women’s Cricket team of the South of England.

Since 1885, Hampshire had played their Northlands Road headquarters in Southampton, as well as using Dean Park in Bournemouth, the United Services Recreation Ground in Portsmouth and May’s Bounty in Basingstoke as regular out ground venues. Hampshire wanted to encourage international cricket to the country which was not possible in Northlands Road as it was a cramped location, surrounded by residential buildings which meant expanding the ground that was impossible.

The replacement talk had started from Newlands Road, Bromsgrove, United Kingdom in the early 1987 when Mark Nicholas (An English cricket commentator and former cricketer and broadcaster) discussed the idea with then Hampshire vice-chairman Bill Hughes in a Leeds restaurant. After which a site was selected just outside Southampton, in West End, on a gently sloping field owned by Queen’s College, Oxford located between the M27 motorway and Telegraph Woods.

The ground was further designed by an English architect Sir Michael Hopkins, whose design of the centerpiece pavilion with its tented roof was similar to the Mount Stand at Lord’s Cricket Ground which was also designed by Hopkins in 1985.

The construction started on the ground in 1997, but the budget for the ground’s construction soon became worse and out of control. Further the funding was fixed as construction continued until its first stage was completed in time for the 2001 season.  The 2001 English cricket season was the 102nd in which the County Championship had been an official competition.

The final cost was £20 million whose major part was secured with National Lottery (It is the state-franchised national lottery established in 1994 in the United Kingdom) and Sport England funding (It is a non-departmental public body under the Department for Digital, Culture, Media and Sport) funding, while the club’s financial future was secured by Rod Bransgrove (An English entrepreneur, cricket administrator and the current chairman of Hampshire County Cricket Club).

Hampshire had applied to the England and Wales Cricket Board (“ECB”) for the Ageas Bowl to be given the Test status that is for the right to host Test matches. However, their application was rejected, with Glamorgan’s (It is one of eighteen first-class county clubs within the domestic cricket structure of England and Wales).  SWALEC Stadium, located in Cardiff, Wales, was preferred to host a Test match during the 2009 Ashes series (It was the year’s edition of the long-standing and storied cricket rivalry between England and Australia, and was part of the Australian cricket tour of England in 2009).

This rejection further lead to Hampshire’s chairman Bransgrove to invest £35 million in redeveloping the ground. The redevelopment included:

Moreover, by the time permission was granted for the first phase of redevelopment the costs had risen to £45 million.

The redevelopment plan of the Ageas Bowl led to the ECB granting the TEST status and it was the first test match between England and Sri Lanka in 2011. The stadium was awarded the right to host the final day of the 2010 Friends Provident T20. Hampshire became the first county to win at their home ground.

In 2010, Ageas Bowl was voted as “Best International Ground” in an independent ECB survey of fans around the country and voted as the “Most Improved Ground” by the All Out Cricket magazine readers.

An additional satellite ground borders the main cricket ground at the Ageas Bowl to the south-east which is commonly known as the Nursery Ground. It hosts Hampshire Second XI matches at the Hampshire Academy in Southern Premier Cricket League matches. Its ends names are the Northern End and the Golf Club End.

The main pavilion, now commonly known as the Rod Bransgrove Pavilion, holds the players facilities and facilities for club members.

The atrium restaurant is located in between the pavilion and the cricket academy building. The cricket academy has six lanes of cricket nets and is used by county squads, the Hampshire Academy, cricket clubs and schools. The two matching stands constructed on either side of the pavilion were to increase the permanent capacity to 15,000 and a four-star, 175 rooms hotel at the northern end. These two new stands include permanent catering facilities along the internal entrance.

The stands are named after two of Hampshire’s most popular captains, Colin Ingleby-MacKenzie and Shane Warne. Moreover, the Boundary Lakes Golf Club, an eighteen-hole golf course opened in 2017 and is also the part of Ageas Bowl complex.

Other than sports, Ageas Bowl hosts one of the largest fireworks displays on the South Coast every November. It even acts as a venue for big-name music concerts such as Oasis (An English rock band formed in Manchester in 1991) in 2005, who performed in front of 35,000 people.  Others include, Billy Joel (An American musician, singer-songwriter and composer) in 2006, the Who (An English rock band formed in London in 1964) in 2007, Neil Diamond (An American singer-songwriter, musician and occasional actor) and R.E.M. (An American rock band from Athens, Georgia formed in 1980) both in 2008, Rod Stewart (A British rock and pop singer, songwriter, and record producer) in 2016 and Bryan Adams (A Canadian guitarist, singer, composer, record producer and photographer) and Little mix (A British girls group singers) both in 2017.