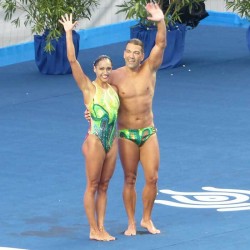 A competitive swimsuit is a clothing element used in aquatic sports such as swimming, diving, triathlon etc. Generally, the swimsuits are made from low resistance fabric which can subsequently reduce the skin drag. Dive skins (unique swimsuits) are also used in competitive swimming and diving. They are made from a synthetic fabric called spandex which contributes to little thermal protection and defence against skin abrasion and stings.

Few other unique swimsuits worn by competitors include partial bodysuits, racerback styled suits, jammers and racing briefs. The competitive swimsuits have more advantages over regular swimsuits. It reduces the friction and drag rate in water, increases the efficiency of swimmer’s forward motion, the tight fit aids in effortless movement and reduces the muscle vibration.

In earlier times, male and female swimmers used to wear one-piece swimming suits made of wool that used to provide complete coverage from hips to shoulders. In 1928, the first competitive swimwear "racerback swimsuit" was introduced by Speedo (then Fortitude).

In the 1950s, nylon swimwears were manufactured that were more robust and smoother with a capability to reduce water resistance. By the 20th century, nylon, a blend of nylon and lycra swimwears were produced. Later, the manufacturers created full-body swimsuits but without arms, head and feet to reduce drag. In 2008, Speedo introduced another swimsuit design - LZR Racer swimsuit for the Beijing Olympic Games. Later in 2009, polyurethane swimsuits became popular as they helped to improve the performance of the athletes but were later banned by FINA.