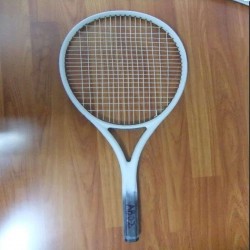 A racquet is a sports equipment used in soft tennis that has an open hoop tied with a handle frame. The hoop has catgut, or a network of strings stretched tightly. The equipment is used for striking a ball and is similar to the rackets used in squash, tennis, racquetball, racquets, badminton, and padel. Collectively, these sports are called racket sports.

The difference between a soft tennis racquet and others is that the former is lighter in weight. Usually, players use 8.5 ounces racquets. These racquets are loosely strung that helps in reducing the effect of the shock.  However, many players tend to use heavy tennis racquets in soft tennis as there aren’t any rules specified regarding the racquet's weight.

The design of racquets in all racket sports has considerably changed over the centuries. Traditionally, the frame of the equipment was made from solid wood, which later shifted to laminated wood. Back then, the strings were made of animals’ intestines and thus named catgut. The drawback of the traditional racquet's size was the weight of the wooden frame. The higher the weight, the more strength it would require to hit the ball. Also, the racquets needed to be strong enough to hold the intestines used as strings.

To eradicate the limitation of the racquets, the manufacturers started making some changes. The stiffness of the wooden frame was improved by adding non-wood laminates. These laminates were initially made of steel, then evolved to aluminum, and later, there was carbon fiber composition.

Racquets that are presently made comes under the definition of composite manufacturing. A racquet comprises a proportionate part of carbon fiber (fiberglass), alloy metals like titanium alloys, or ceramics. Catgut is completely replaced by a combination of nylon / polyamide and other polymers. After every match, the racquets are restrung to meet the professional standards of the game.