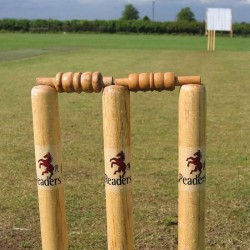 The bails and stumps together form the wicket in cricket. The falling of bails either being hit by the ball or struck by the bat or any part of the batsman’s body helps to ensure that the batsman is out. Knocking off the bails (from the wicket) is required to bowl out, stump, run out or hit wicket the batsman. Hence, the broken bail is critically important for a team to put down wickets of their opponents. The bails have specified lengths of the barrel and spigots that must be followed in all official matches. During some cases, when the conditions are unfit (during heavy winds, etc.), the umpires have the power to dispense the use of bails.

The bails are made of wood. It has a middle cylindrical part with two smaller tubular parts protruding from the two edges. The midsection is called barrel whereas the side parts are known as spigots. The spigots are generally unequal in length, the longer rests solely on one stump whereas the shorter rests on the middle stump with the short spigot of the second bail. Some special heavy bails, made of lignum vitae, a denser variety of wood are used to prevent the bails from falling off the stumps by itself due to windy weather conditions. The bails have a length of 4.31 inches (10.95 cm). These are required to be positioned accurately on the stumps without projecting outwards.

Dimensions of a Bail used in Official Cricket Matches

Both the spigots and the barrel region occupy the same centre line.

History and Evolution of Cricket Bails

Traditionally, stumps and bails are made from wood. The bails are light enough and can be easily displaced with heavy wind. In recent times, the bails are made from composite plastic and embedded with LED lights. In July 2013, the International Cricket Council (ICC) approved the use of the LED bails (flashing bails/ wickets).  With passing time, the use of LED wickets is increased and is preferred in every domestic, national and international match.

The new modified bails have low voltage batteries attached with a microprocessor. This microprocessor detects it when the connection between the stumps and the bails is broken. After being hit by the ball, the microprocessor sends a radio signal to the stump helping it to glow.  The new age bails help in easy detection of whether the batsman got out or not. The Zings are one of the major manufacturers of LED wickets and are widely popular.