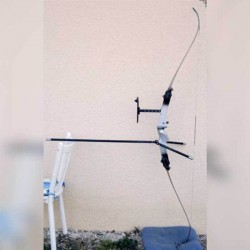 Archery stabilizers are the various types of weights placed on an archery bow to increase the precision and stability while aiming. The stabilizers function well by reducing the inadvertent movements that enhance the repeatability and precision along with increasing the moment of inertia of the bows. The bows are subjected to various types of force acting upon them, such as the muscular force, the force between bow and strings along with the rate of acceleration. The stabilizers minimize all these forces along with force acting in the central bow section, which significantly increases the static inertia resulting in the least movement. It also reduces trembling or shaking while aiming, by gradually increasing the energy to hold the bow against gravity. A variety of stabilizers are available varying in size and configuration but serve the same purpose -

The main body of the stabilizers is composed of a solid piece of a tube-like material. Traditionally, the stabilizers were manufactured from metal which used to make it heavy. However, the primary purpose of stabilizers is to add weight, but too much weight also hinders the archer’s performance. Manufacturers, therefore, use lighter materials now such as carbon, ABS plastic or others to make the body lighter yet rigid. Most stabilizers have a dampening device made from a particular type of rubber, gel or sand to reduce vibration, shock or noise.