A Tribute to Major Dhyanchand on National Sports Day 2020: A legend who said “NO” to Hitler 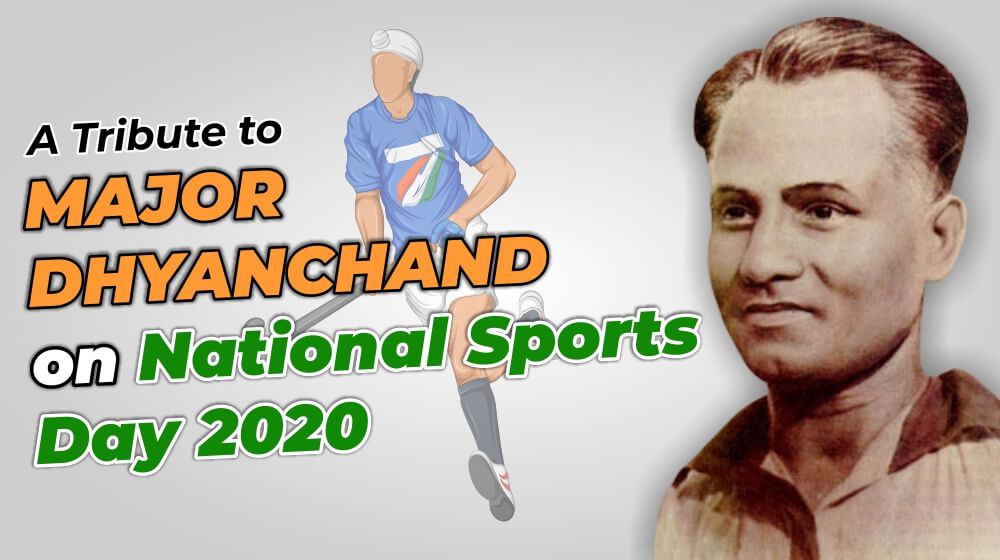 Indian National Sports Day is celebrated on 29 August every year to commemorate the birthday of Major Dhyanchand— India's legend hockey player. Popularly known as 'Hockey Magician', he was born on 29 August 1905 in the city of Allahabad. Dhyanchand joined the Indian Army as a soldier in 1922 at the age of 16 and started the career that made him a legendary figure in the history of Indian sports. For him, hockey was nothing less than a ‘religion’. As he mentions in his autobiography— GOAL, “ever since I started playing this beautiful game, I became one of its great devotees.”

Major Dhyanchand Singh was a true sportsman and a great hockey player who if once the ball was stuck in his stick, the ball would go away only after scoring the goal. This was the reason that his stick was broken once during the match, to check if the stick contained any magnets or anything else inside. Seeing him perform, Adolf Hitler himself offered Dhyanchand a position of Field Marshal in the German Army with German citizenship, which he refused.

Subedar Major Tiwari inspired him to play hockey, who himself was a sports lover. Dhyanchand began playing hockey under his coaching. His outstanding performance in his game made him promoted to 'Lance Naik' in 1927. In 1932, he was promoted to Nayak and Subedar. Later he became a lieutenant; Captain and was eventually promoted to Major.

1936 Berlin Olympics where Dhyandchand said ‘NO’ to Hitler

A group of about 40,000 people were present to watch the final match between the two teams, which included top Nazi officials such as Hermann Goering, Joseph Goebbels, Joachim Ribbentrop and the Fuehrer, and along with them, Adolf Hitler himself came to watch the finals. After the final match started, the Indian team could not score a single goal before the interval, while in the second half, the Indian team did well and defeated Germany 8–1 with all their strength. Allegedly, Dhyanchand played with barefoot and later with rubber slippers during the match, making the audience there stunned by his astonishing performance.

Adolf Hitler left the stadium with frustration after Germany lost to India. However, Hitler came back to present the gold medal to the Indian team. The next day Hitler sent Dhyanchand a message by the Fuehrer, after receiving it, Dhyanchand was a little surprised, as Hitler asked him to come and meet him. Legendary hockey player became quite worried after this because he had heard the stories of the Nazi dictator shooting people on the spot.

When Dhyanchand reached Hitler's private box at the stadium to meet Hitler, Hitler welcomed him very well. Hitler then asked Dhyanchand what he had done in India, in which Dhyanchand told that he worked in the Indian Army. Hitler is believed to have offered Dhyanchand an elevated position in the German Army at the time, impressed by his brilliant performance in the Olympic final, about which the Fuehrer was also a witness. However, Dhyanchand politely declined the offer, saying that his family lives in India, and therefore, it would be very difficult to relocate there. Hitler understood his circumstances, and then he ended the meeting.

This 1936 Berlin Olympics video proves that Hitler was present at the stadium when India played against Hitler's Germany.

Major Dhyanchand scored more than 400 international goals in his career from 1926 to 1948 and had scored nearly 1,000 goals in his entire career. To pay proper tribute to a legendary player; the Indian Government has decided to celebrate his birthday as National Sports Day since 2012.

National Sports Day is also widely celebrated nationally. It is organized every year in the Rashtrapati Bhavan and with the President of the Country; It offers the National Sports Awards to the respective sports winners, who have raised the value of the Indian flag throughout the world.

Current and former sportspersons are honored with several awards under the National Sports Awards, such as the Rajiv Gandhi Khel Ratna Award, the Arjuna Award and the Dronacharya Award. With all these honors, the "Dhyanchand Award" is also conferred on this day.