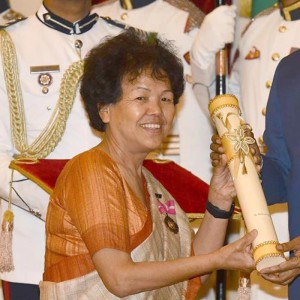 The trek is not for the weak and I am happy that I took the risk of doing it. The biggest risk in life is not to take risk. Always remember that.

We know her, we are proud of her, and we look at her as a role model for many of us through a wider age ranges. The lady who scripted her name in golden letters by standing at the peak of the Mount Everest back in 1984 and she never concluded her journey to achieve something broader and extraordinary in life. No need to guess, we are indeed talking about Mrs. Bachendri Pal, India's first female mountaineer who summitted the Mount Everest crossing plethora of circumventions and leading her way ahead to script a world record.

On 24th May 1954 in the womb of Himalayas; a girl was born to Hansa Devi and Shri Kishan Singh Pal and was named Bachendri. The girl with a sunlit face and a bright vision began to show her gutsy grit as soon as she learned to walk. Being amongst the seven children of the couple, meeting both ends of life was like knotting the hill, but Bachendri was not amongst those who complained. Instead, she was fair enough to judge the circumstances and act accordingly although she never left any chances of mischief with her partners in crime and was known as a chatterbox of her village.

The First Call from the Peaks

At the age of 12, Bachendri went for school picnic along with her friends and scaled 13,123 ft (3,999.9 m) high peak. This was the first time; she realised her real love for adventure and her aim of life. Bachendri completed her M.A. and B.Ed. from D.A.V. Post Graduate College Dehradun and became the first girl from her village to be a graduate. Her family wanted her to become a school teacher, but Bachendri had other plans full of adventures, and therefore, she had to face a lot of accusation. While she was pursuing the mountaineering course in Nehru Institute of Mountaineering (NIM), she climbed to Mt. Gangotri 21,900 ft (6,675.1 m) and Mt. Rudragaria 19,091 ft (5,818.9 m). Later on, she got employment at the National Adventure Foundation (NAF).

The big moment came to Pal's life when she was selected to join India's first mixed-gender team to summit the Mount Everest in 1984 consisting of six female and eleven male mountaineers despite her poor health conditions at the time. The team began the ascent in May. And, then something horrible happened. In her own words, "I was sleeping in one of the tents with my teammates at Camp III at an altitude of 24,000 ft (7,315.2 m). On the night of 15–16 May 1984, at around 00:30 hours IST, I was jolted awake; something had hit me hard; I also heard a deafening sound and soon after I found myself being enveloped within a very cold mass of material." Bachendri's camp was buried in an avalanche. Almost half of the team got severely injured and had to return but not the girl with her gutsy grit to move on. She resumed her chase to the peak and destiny favoured the gallants; making Bachendri India's first female to summit the Mount Everest.

With her extraordinary summit to the Mount Everest, Bachendri became an inspiration for every girl and her story, a legend to follow with her undefeated spirit and "Never say die" attitude. The whole nation enchanted her name, and there were her talks amongst every discussion. As it is well said that success comes to many but sustain with a few who can maintain it and Bachendri was amongst them. Post her historical summit to the Mount Everest; she didn't take a pause. Instead, she determined her way to encourage people imparting adventurous sports especially women.

In 1993, Bachendri led an "Indo-Nepalese Women’s Mount Everest Expedition" team that included only women and reached the summit setting a benchmark for Indian mountaineering. The following year, she participated in "The Great Indian Women's Rafting Voyage", the pioneer journey of women rafters from Haridwar to Calcutta through the Ganges measuring 2155 km. in 39 days. In 1997, she attempted successfully the "First Indian Women Trans-Himalayan Expedition" along with 7 female mountaineers to trek from Arunachal Pradesh to the Siachen Glacier, reaching the northernmost tip of the nation at the height of 20,100 ft (6,126.5 m), surpassing 40 high Mountain passes. This was the first successful attempt by any country and the proud history of the nation.

Besides being a successful adventurer, Bachendri' s generosity has made her the respective figure in society. She never flaunted about her social services and active participation for noble causes and always found quietly working for her aim. In 2013, after the devastating floods in North India; she along with Premlata Agarwal (the first Indian women to reach seven summits) and a group of Mount Everest summiteers; went to the affected region to rescue the victims of the natural disaster in the remotest villages. Bachendri Pal's love for adventure and daring spirit is an excellent example for every one of us to kick start our journey for what we want in life and live our dreams in reality, not just while snoring.