1975-2020: Indian Cricket Team's Jerseys that evolved over the years 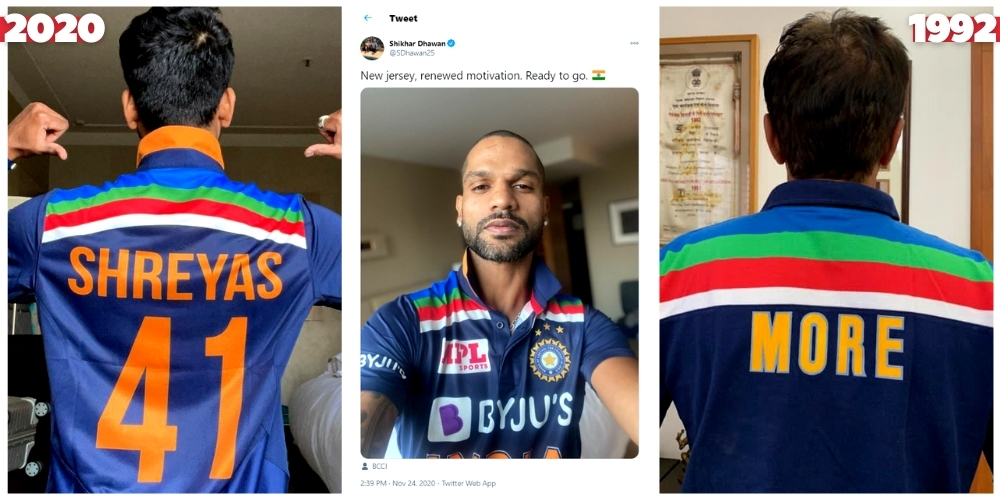 Thirty-seven years ago, in 1983, ODI Cricket was played in 60 overs instead of 50 overs, and all teams wore plain white Test jerseys. The coloured jerseys saw the light of day later in the year when the Kerry Packer World Series started taking place.

1986 World Series introduced the coloured uniform in cricket, but its regularity came in 1992. Indian jersey is evolving in colour and design since 1992.

The first colour jersey of cricket appeared during the 1992 Cricket World Cup. After the introduction of white clothing at the 1975, 1979, 1983 and 1987 World Cups, the 1992 World Cup changed the way cricket competitions were played.

On the ongoing Australia 2020 tour, India again wore the same 1992 retro jersey during the tour's white-ball legs. The limited-overs series has already ended in which India lost the ODI series by 2-1 but won the T20I series against Australia. Four-match Test series is yet to begin from 17 December.

One of the things that are constantly changing is the jersey worn by the team. Let's take a look at the long-standing evolution of Indian jerseys over the years -

Coloured jerseys were first used in the 1992 World Cup. Until the 1987 World Cup, teams continued to wear the white jersey, the same as Test. Therefore, in the first three editions of the World Cup, red balls were used instead of white. 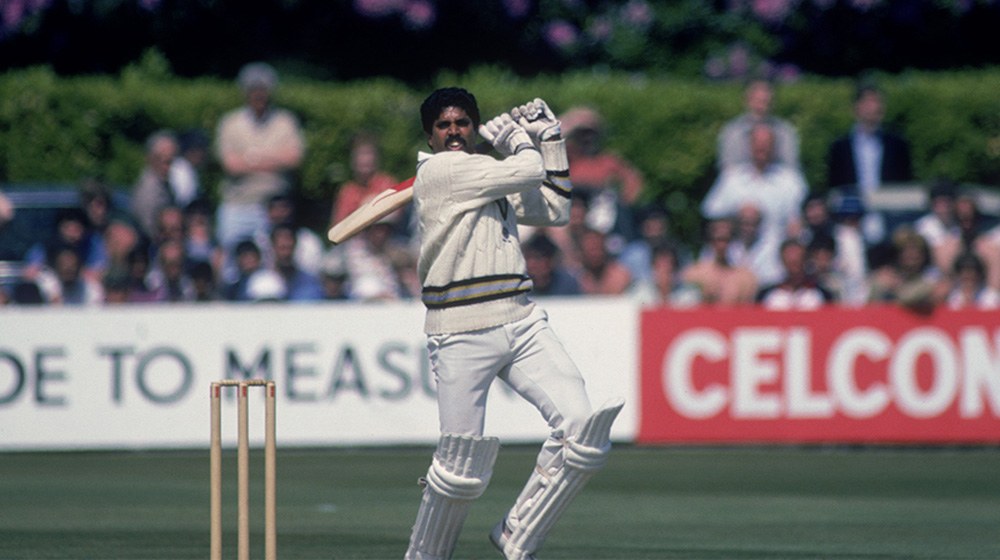 India couldn’t make it in 1975 and 1979 because the team was knocked out on the group stage itself. They made history in the 1983 World Cup as they defeated West Indies at Lord's to become the World Champions for the first time. 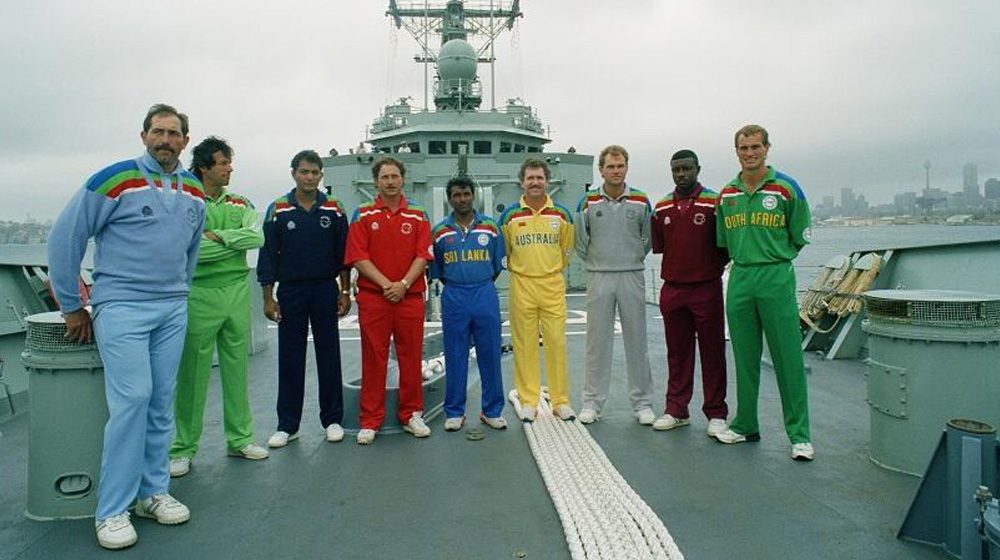 The 1992 Cricket World Cup, co-hosted by New Zealand and Australia, was the first edition for all nine participating teams, including South Africa, appearing in their respective coloured jerseys.

Pakistan bagged their first World Cup trophy at the 1992 World Cup by defeating England in the final by 22 runs. India was not able to do any wonders and performed not so good in the World Cup and finished 7th out of 9 teams. India was led by Mohammad Azharuddin and only won two of the eight matches they played. It was also the first World Cup for Master Blaster Sachin Tendulkar.

Jersey - The Indian team was found wearing a dark blue colour jersey. In that jersey, there were blue, green, red and white stripes on the shoulders. In the middle of this iconic jersey, "India" was painted in pale yellow colour.

1994 – Beginning of Yellow-Blue Pattern at the Wills World Series 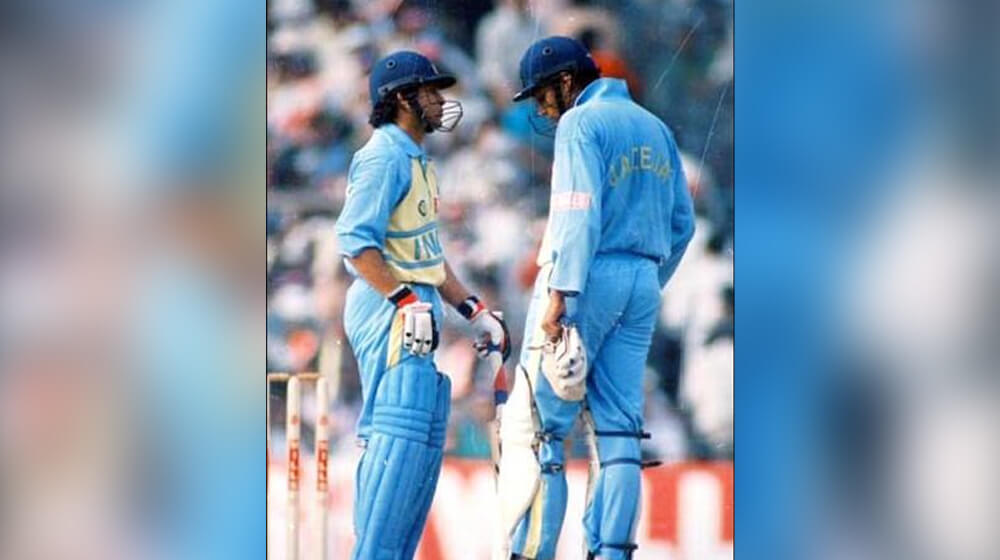 The design style of the jerseys of three teams (India, West Indies and New Zealand) was the same.

Jersey - This jersey marked the yellow front theme of the Indian team. Until the 1999 World Cup, this jersey maintained continuity in many series.

1994 – Yellow dominated Blue at the India tour of New Zealand

India went to New Zealand to play a Test match and 4 match ODI series that ended in a 2–2 draw.

Jersey - India continued to wear the yellow front theme in the jersey, but the trousers and half portion of the jersey returned to dark navy blue. The strips on one side of the jersey made it one of the most fashionable jerseys of the Indian cricket team. 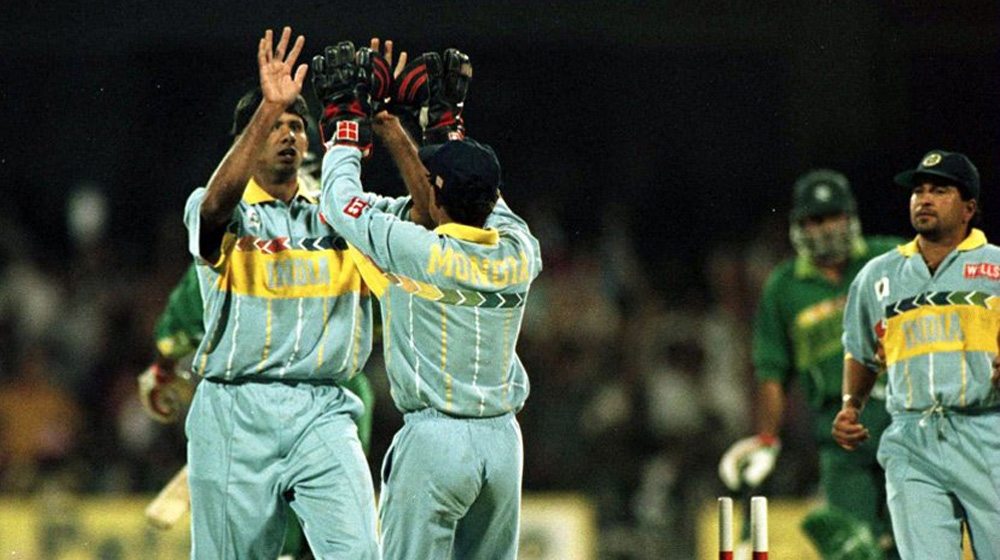 The 1996 World Cup took place in the subcontinent for the first time as it was hosted in India, Sri Lanka and Pakistan. This special edition was in the limelight from beginning to end for more than one reason. Australia and the West Indies refused to play in Sri Lanka due to safety concerns. This allowed Sri Lanka to win the match against them on the group stage. India reached the semi-finals of the tournament but lost to Sri Lanka. Sri Lanka defeated Australia in the final at Lahore and won the World Cup.

Jersey - This time Indian team wore a jersey with a much lighter shade of blue along with yellow colour and the collar of the jersey was also yellow. The jersey also featured coloured arrows on the chest part and sleeves. 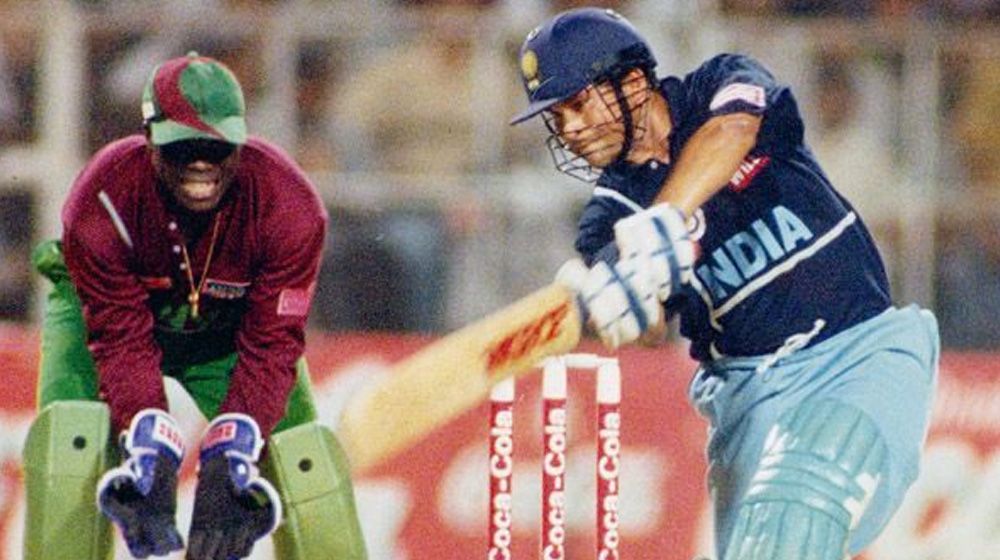 The Coca-Cola Triangular Series was the ODI cricket tournament held in 1998, hosted by India. This was a three-nation series between Kenya, India and Bangladesh. India and Kenya played the final, in which India defeated Kenya to win the series. 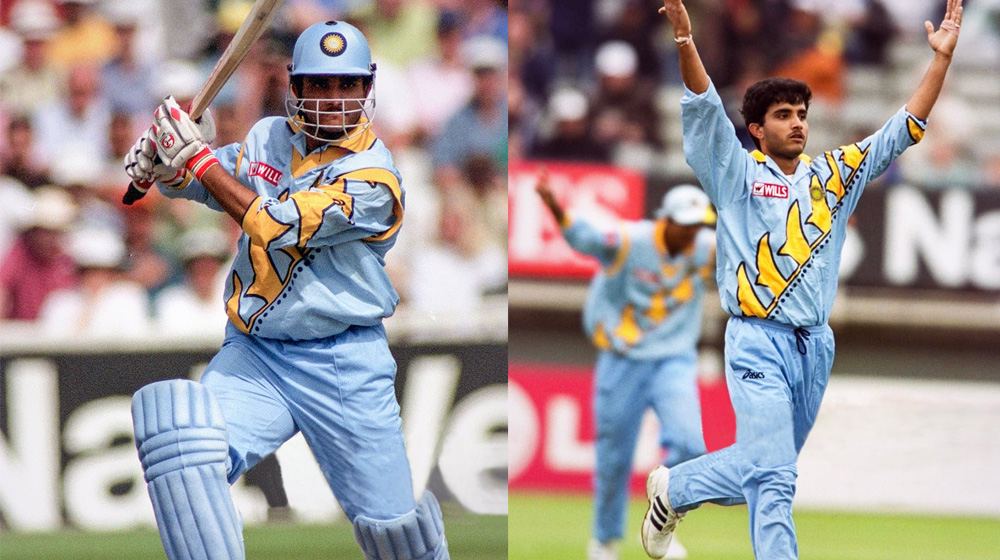 The 1999 World Cup edition was held in England and attended by 12 teams from all around the globe. This tournament followed Super Six format in which 6 teams were divided into two groups. India finished second in the group, but performed very poorly in Super Six and won only one match. In the end, Australia defeated Pakistan in the final after a tough semifinal against South Africa.

Jersey- The Indian jersey this time was similar to the 1996 version. However, this time the yellow colour was more noticeable. The diagonal yellow pattern with a black border went across the chest while the rest of the jersey was blue. The collar was yellow again, but the border was black. 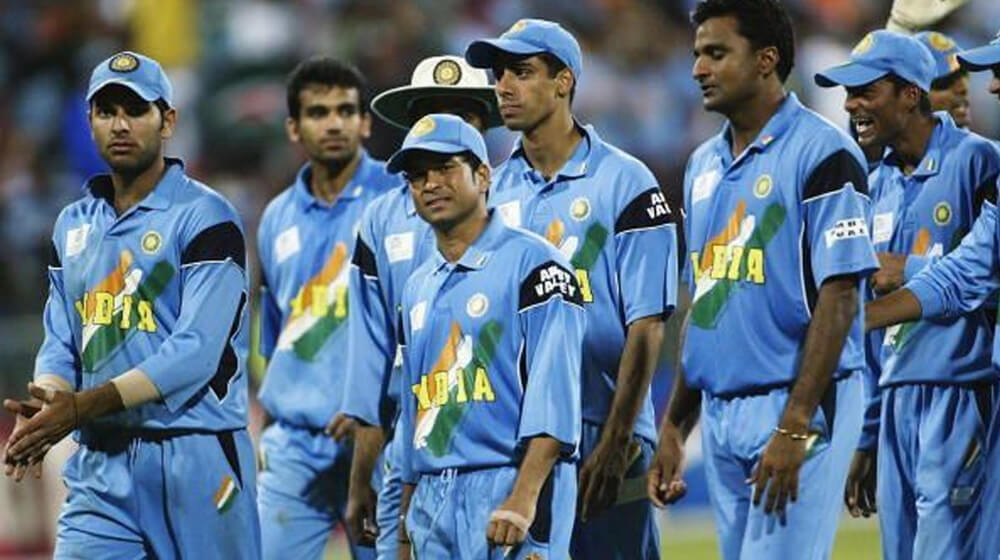 A total of 14 teams participated, divided into two groups. The format of this world cup was similar to that of the Super Six in 1999, after the group stage. India performed very well throughout the tournament and advanced to the final to face Australia. However, they were easily defeated by Australia as the team won the title for the second consecutive year.

Jersey- In this World Cup, the Indian jersey was a major upgrade from its predecessor and was loved by fans, as the word "India" was present on the chest part with a tricolour striped background. Indian jersey has witnessed a dramatic change, with blue becoming darker and yellow disappearing. 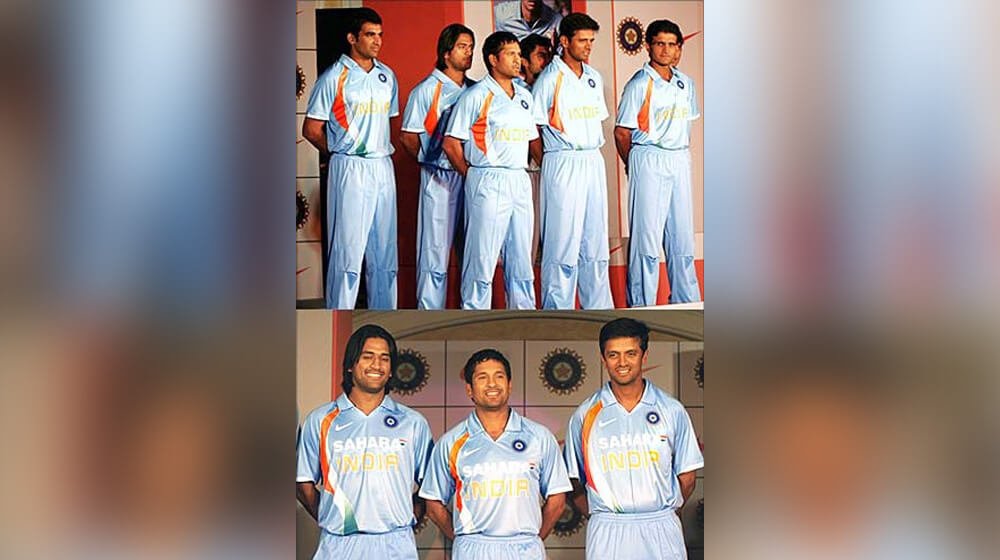 So far, the 2007 World Cup held in the West Indies, was India's worst World Cup ever. Despite being favorites at the beginning, India was overthrown by Bangladesh in the first game. They continued to lose to Sri Lanka and were eliminated from the tournament. This loss shocked many cricket fans who chosen India as a favorite that year, especially after becoming a finalist in the previous edition. India finished third in the group stage and did not make it to Super 8. In the final, Australia defeated Sri Lanka and claimed the World Cup for the third consecutive year.

Jersey- This year the pale blue colour made a comeback in the Indian jersey. It can be said that this is India's neatest jersey so far on which "India" was written in bold yellow. 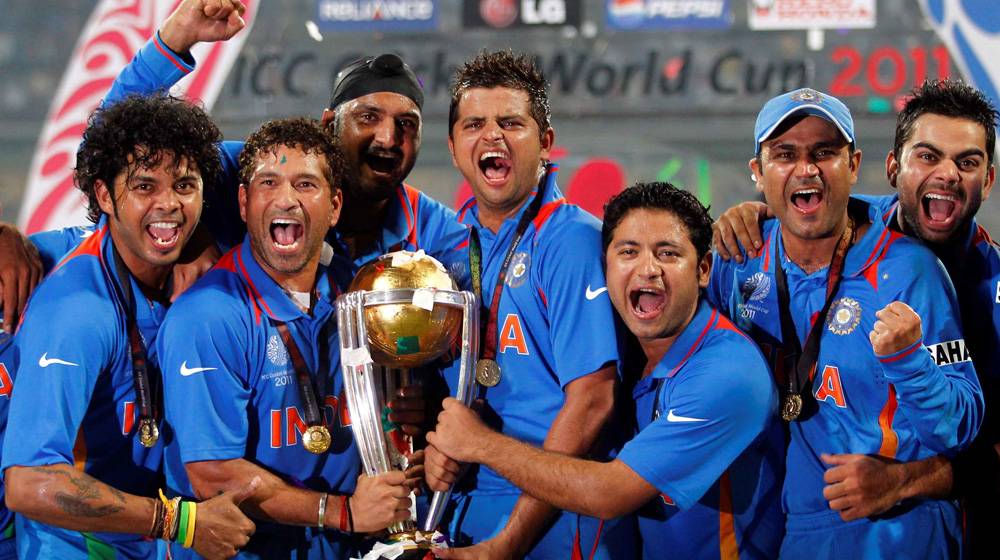 The 2011 World Cup is unforgettable for Indian fans as after a long twenty-eight years gap, India lifted the World Cup trophy. Team India defeated Sri Lanka by 6 wickets in the final to win their second title at Wankhede Stadium in Mumbai. 14 teams participated in the game who were divided into two groups of 7 each; the top 4 from each group entered the quarterfinals.

Yuvraj Singh was named "the man of the tournament" for his outstanding all-round performance. However, this victory is more special than other aspects. This was Sachin Tendulkar's first World Cup win after serving the national team for 24 years. The victory became even sweeter because it came from his hometown Mumbai. 2011 World Cup final is also remembered for the match-winning six shot by MS Dhoni.

Jersey - In this edition, India's jersey remained the same as previous, with only minor changes in colour and position. The most obvious change was the saffron colour "India" across the chest.

2015 - Blue and Saffron Jersey made out of recycled bottles 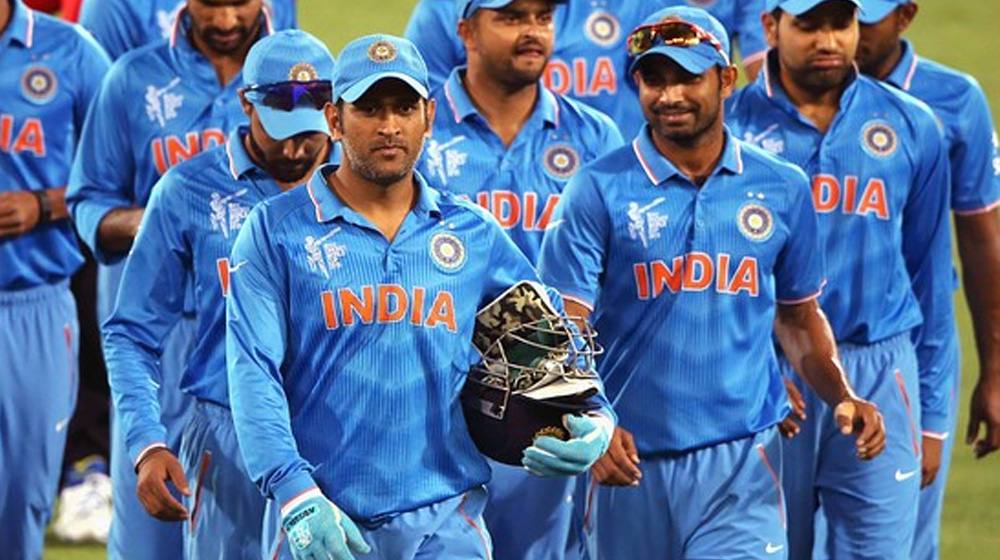 Australia and New Zealand co-hosted the 2015 World Cup. Coincidentally, these two teams also qualified for the finals of this edition in which Australia again clinched the World Cup trophy for the fifth time and became five-time world champions.

India was unbeaten in the group stage and did not lose a single match. They easily defeated Bangladesh in the quarterfinals but lost to Australia by 95 runs in the semifinals.

Jersey - Sports brand Nike designed Indian team’s jersey for this World Cup using 33 recycled plastic bottles to raise awareness to protect the environment. The jersey was similar to the 2011 edition’s design, only the white border was added. 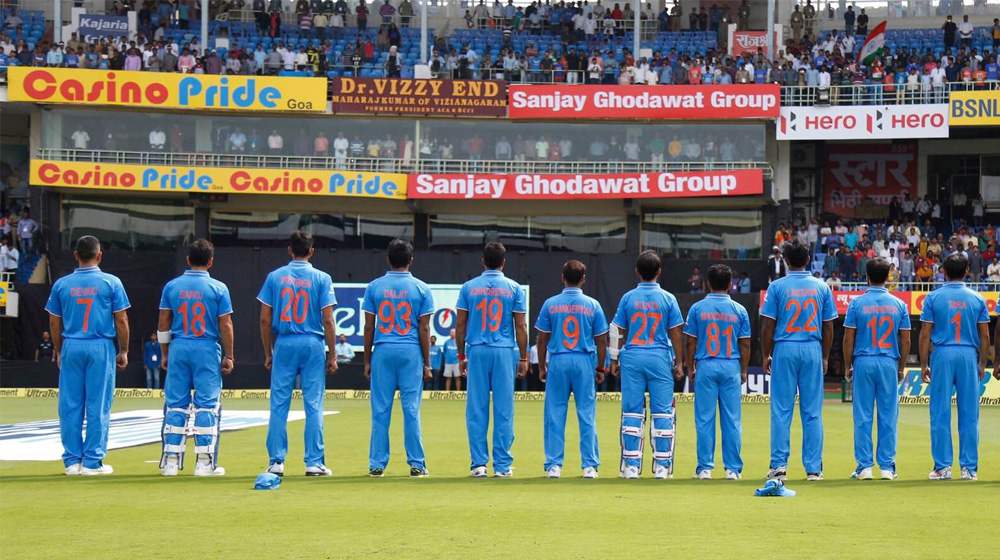 India played their fifth and final ODI against New Zealand with the series tied at 2-2 at the ACA-VDCA Stadium, Vizag on 29 October, 2016. Men in Blue defeated New Zealand by 190 runs and clinched the series.

Jersey- This was the first time in sports history that a team (India) wore jersey with their mothers' name on the back. It was done to highlight the importance of mothers in everyone’s lives. 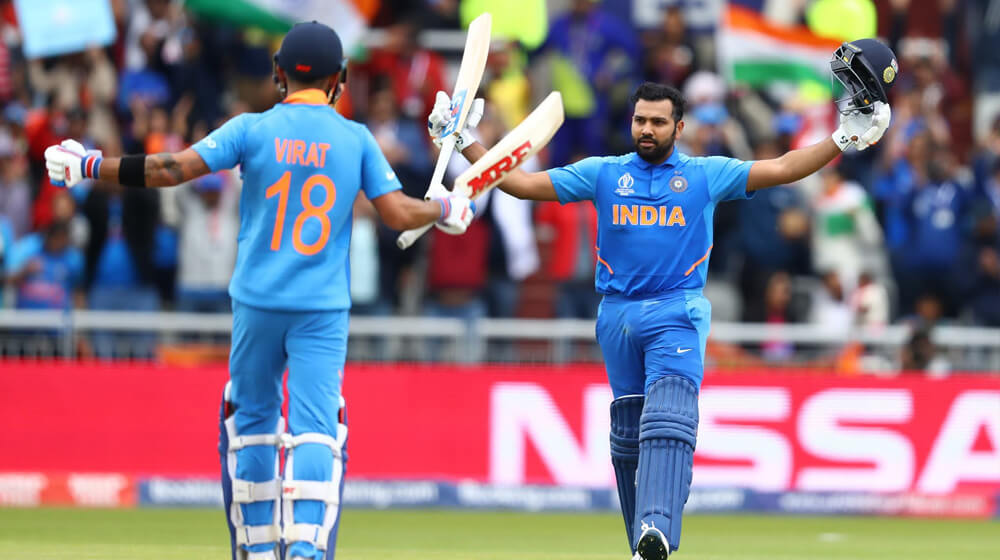 England and Wales hosted the 2019 World Cup. There were ten teams in total to participate in the tournament. The format was similar to the 1992 format where the round-robin format was revived after 27 years. The top four teams in the semifinals were India, New Zealand, England and Australia. Throughout the game, India's performance was consistent, but in the semifinals, India was ousted by New Zealand. Due to the rain, the match lasted two days.

Jersey - India's jersey for 2019 World Cup looked probably the smartest, with dark blue shades occupying most of the T-shirts and pants. The word "India" continues to appear across the chest. The 1992 Retro look made a comeback in 2020's India Tour of Australia. Indian team has already begun their limited-overs series against Australia in November-December. An indigo blue jersey follows the retro look of the Indian cricket team with three strips on the shoulder representing the Indian flag. 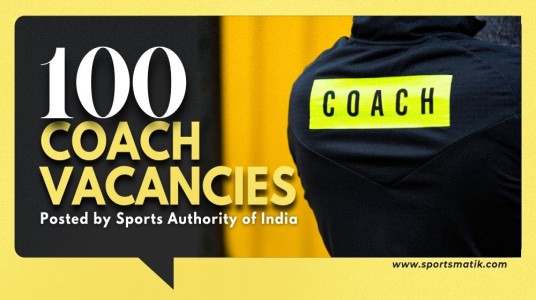 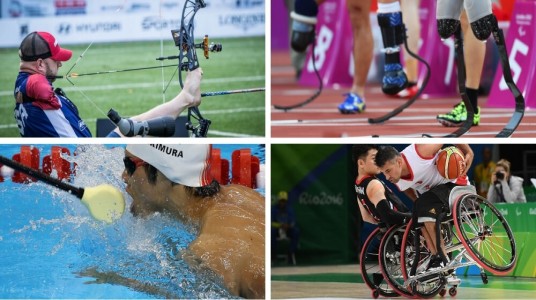 Why every Child should choose a Sport