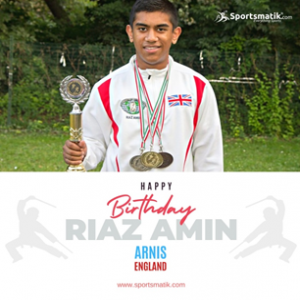 Riaz Amin is an English martial artist who practices Shotokan Karate and Filipino Martial Arts. He is the third generation British Bangladeshis (People of Bangladeshi origin who have attained citizenship in the United Kingdom through immigration and historical naturalization.)

Riaz started martial arts at the age of five in Shotokan Karate with Alton Brown and Joe Anderson of Toyakwai.

He has won many laurels as he entered local, national and international competitions such as Gold in the English Open and Southern Regional Championships. He also won Gold, Silver and Bronze in the Malta Four Nations International Open Championship organized by SKSM Karate Malta and stood 4th in the Funakoshi World Championships.

In 2009, Amin won Gold in the European Karate Federation (“EKF”) International, Essex Grand National Open Championships and Capital Open Championship. Riaz started learning Filipino Martial Arts (“FMA”) at the FMA Academy under the guidance of Master Shamim Haque and Abjol Miah at the age of thirteen. It is Haque who teaches him the deadly blade art “Kalis Ilustrisimo.”

Riaz had entered the first full contact event at the British WEKAF Tournament and became the Cadets British Champion in Single Stick Fighting at the age of fourteen on 2 December 2012.

In July 2014, Amin became a Cadet’s squad member for Great Britain and was given the chance to compete in the World Eskrima Kalis Arnis federation (“WEKAF”) World Championships in Budapest, Hungary. In which the fighting encompasses many styles and forms and is based around the Filipino Martial arts based system. Amongst all this Riaz was involved in hand to hand combat.

The competitive events involve the double, single and soft stick / first strike bouts in which Riaz had excelled in each category and became the 2014 World Eskrima Kali Arnis Federation (“WEKAF”) World Championships world champion that was held at Budapest, Hungary.