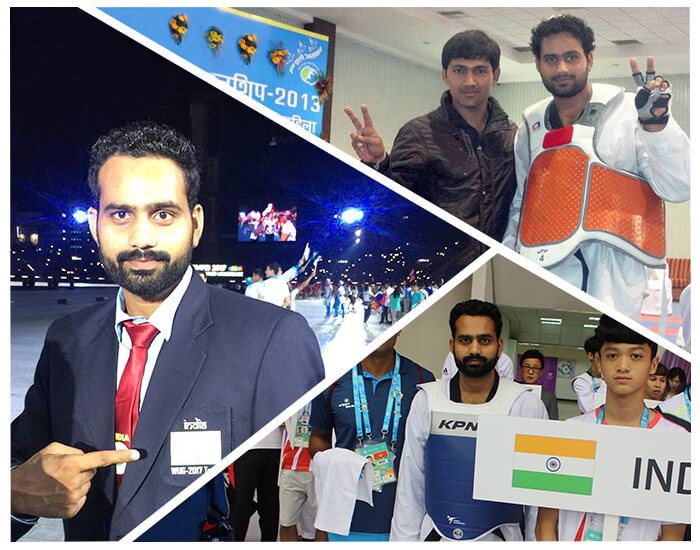 To achieve your goals, you have to give blood, sweat and tears and that’s what actually Ajay Dalal, the son of a farmer from Delhi, India realised while jumping through every hoop to fulfil his dreams. Ajay Dalal is now an international taekwondo practitioner, who had won the Gold medal in Commonwealth Taekwondo Championship 2017. It is rightly said that destiny favours only those who have strong will to conquer victory and Ajay Dalal is amongst them. While expressing his views to the team of Sportsmatik.com, Ajay revealed some unknown facts of his journey.

What was the triggering moment when you realise about your passion for sports?
I started playing Taekwondo when I was in class 3 at Hans Raj Model School Punjabi Bagh. Before that, I used to play all games like any other kid. My school coach identified my potentials for the taekwondo and encouraged me to go for it. He was quite impressed with my response timing which was the basic skill needed to be a taekwondo practitioner. And, hence, the quest started.

Tell us about your journey from a regular guy to an international athlete.
I had my first break in 2005 when I played my first federation tournament in Manipur and reached to quarterfinals. My first mentor was Mr. Sanjay Kumar, the then Delhi Team’s coach. He saw me performing with the sheer ability and made me realise that taekwondo is the sport I have always wanted to sink my teeth into. After that, I played in CBSE National Taekwondo Championship, in Durgapur, West Bengal in 2007 where I hit success, being the first taekwondo practitioner from the North zone to earn a gold medal in the event. Post that, I represented my nation at various international tournaments back to back through my federation which boosted up my confidence. In the 1st India Open International Taekwondo Championship 2010, I won in 4 matches but lost in the 5th one by Iran. This triggered me to push myself harder to be a world level taekwondo practitioner. 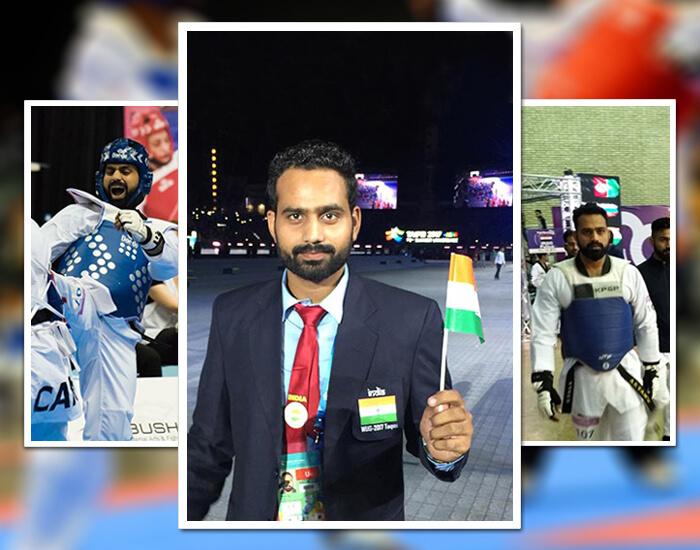 I qualified for the 2010 Commonwealth Championships but got injured during a practice session and failed to perform. I made a successful come back in the 2012 World University Taekwondo Championship. Then, I gave back to back performances, facing many injuries as I performed in the heavyweight category where games are usually rough. It was a very tough time for me. I started to doubt my potentials. In 2016 in Iran, I made a comeback with a series of success that pushed me up. I won my first international gold at the Commonwealth Taekwondo Championship in 2017. It was a superb match. I had the positive vibes and was 100% sure to win. I knew it was my day.

What was the role of your parents in your career?
I was born and brought up in Delhi, belonging to a farmer family. My father is a farmer and mother is a housewife who used to sell milk. My mother is a determined and firm lady from whom I adapted these qualities. I remember how she convinced the headmaster of an English medium school Hans Raj Model School to get me admitted which was almost impossible for our family as we couldn’t afford it. But with her firm conviction, she succeeded to get me enrolled there. Thus, I would like to mention their part in my successful career. They have put their shoulders to the wheel to make my life smooth.

Who is your role model?
On this, I would like to mention Sandeep Kundu (Bhim Awardee), Shiv Kumar (Maharaja Ranjit Singh Awardee), Surender Bhandari (Asiad Medalist) as my role models to whom I always look up to seek motivation and guidance in my life.

Name the athlete with whom you had the hardest clash?
Back in the day at the World University Taekwondo Championship in 2012, I had the opportunity to fight with Robelis Despaigne, from Cuba. I considered it as my most robust clash. He was one amongst the Olympians who were performing in the competition. Although I lost, I didn’t let failure overshadow my passion. In fact, it was a good experience to know the standards of playing in international level and that I had to practice harder for the big games.

What are your views on training and discipline?
According to me, training and discipline go together. There is no training without being disciplined. We used to follow a strict routine during our practice sessions. Our coach as an Army man was very strict about discipline. Our session used to start at 5:00 am but we were instructed to reach there before him as he used to come at 4:45 am. So we had to be there till 4:30 am. It was like a penance for us that taught us, one who is not disciplined can never achieve success.

Mention your priorities in life and why?
Right now, I want to perform in more tournaments and bring more medals for the country. It’s a dream for every athlete to raise his national flag on the top at the international stage and when the national anthem plays along, it fills us with emotions and patriotism, proving all our trials and strong>tribulations to be worth.

What does Taekwondo teach you as a real-life lesson? 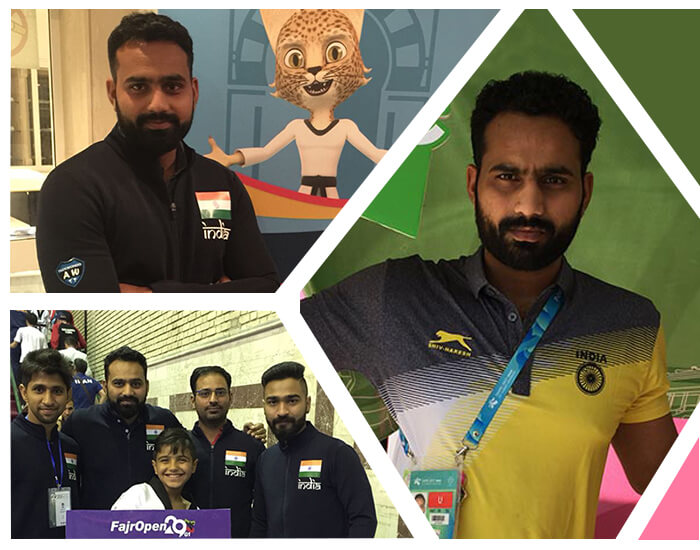 As taekwondo is a martial art, people often think that it’s all about attack. But it’s not like that. First, you need to understand the techniques of your opponent, going defensive and then play your game. The same thing applies to life. It brings ample of challenges now and then that we should first analyse and then act accordingly.

What would Ajay Dalal be if not a Taekwondo player?
I would definitely be a farmer.

Where do you look taekwondo as a sport in the coming 10 years in India?
A decade ago, we used to practice on grass and used slippers as a pad for kicking as there were no mats. Bahut jugaad lagana padta tha. We had to travel a lot to learn the basics of the sport, keeping our nose to the grindstone. We didn’t get proper treatments after injuries that proved to be a barrier to our career. But time has changed a lot. We have numerous academies with good set-ups where players can learn under the tutelage of skilled coaches and bag medals for the nation. I’m sure India will earn more medals in the upcoming years.

Why do you think India couldn’t get an Olympic medal in Taekwondo till now and what can be done?
Asian countries such as Korea, China, Thailand, Iran, Uzbekistan and many more are performing astoundingly well in the sport, and we have to compete with them first to go for the big games. What we can do, is to go with a systematic approach. There should be a campaign. If we are targeting the 2020 Olympics, then practically it is not possible. We should take some time to prepare. Players should be divided into groups according to their strength. As you see, there are Ranking Tournaments that we need to qualify first. We should perform there at our best as it makes our way more accessible for the big games. Our players are giving their best and spotting positions in the top 100, but with the right planning, the scenes can be far better.

How did the idea of Aryan’s World strike your mind?
Back then when I used to practice, I had to travel around 30 km away from my town. And sometimes reaching there, I found that the coach was not there, or my partner was not there to practice with me. It was very hectic and tiresome. We were four athletes at that time: Ajay Yadav, Neeraj Kumar, Abdul Mobin Khan and me, who decided to start our academy so that other players may not get hindered by such scenarios and have proper training, without quitting.

What is the vision of Aryan’s World?
To make it one of the best academies in India where players can seek better guidance. Our athletes are doing well in national tournaments. Keeping our aim in mind, we help players who can’t afford training facilities and assist in organising tournaments for them. Recently, we have helped to conduct a rope skipping Tournament.

Who are the sponsors of your academy?
We have some sponsors. A pharmaceutical company Diclowin Carbo fast spray, Shivanta International (Preety Bhasker), Sri Venkateshwar International School and The Manish Gym (Manoj vaja) who sponsor us primarily since the time we started our academy as they have seen our struggles and growth.

Your piece of advice for the burgeoning taekwondo stars.
As I told you, Taekwondo is not just a game. It’s an Olympic sport that can provide international recognition to athletes and make them financially stable. Taekwondo helps you to be physically and mentally strong to overcome adversities. As you need to perform with a quick response-time that makes you wiser to take quick decisions. The same concept applies to life. You have to take the rough with the smooth. Besides this, I think girls should practice taekwondo as it teaches them self-defence which is necessary to deal with odd situations.

What do you think about the initiative taken by Sportsmatik.com?
It’s awesome! Apart from major sports like cricket and football, you are highlighting the culture of other sports as well and making a lot of effort in bringing the talented athletes belonging to other sports in front of the world which is the prime factor of this concept, what I realised. Through Sportsmatik.com, I got this chance for the first time to express my views and opinions. I’m thankful to Sportsmatik.com and wish them luck.

Check out the sportsmatik profile of Ajay Dalal