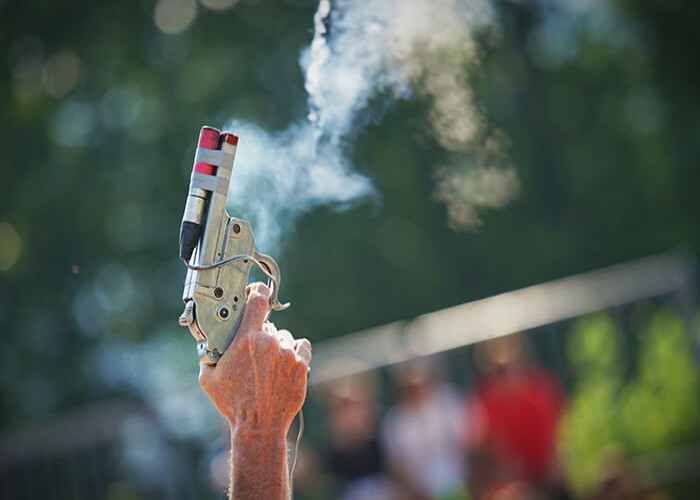 A starting pistol or starter pistol is a blank handgun used to signal the start of the race in athletics, swimming and other sports. It has also been used in big events and concerts.

The starter guns cannot fire real bullets without first being extensively modified. Moreover, blank shells or caps are used to prevent expelling projectiles. They are mechanical devices that explode the encased paper cap with a sound and a plume of smoke is released when a person pushes the trigger.

How are they different from normal guns?

Starting pistols do share similarities with the standard pistols but the thing that marks the difference is that they are made from an alloy to prevent firing live rounds which makes them light for use. This is achieved by blocking the barrel and they are designed such that if the barrel is drilled out the gun will fragment.

The latest version of starting pistols is the electronic timing that is used. A sensor is affixed to the gun that sends an electronic signal to the timing system upon firing.

These guns are popularly used in the western countries such as European Union as well as the U.K., Norway, Iceland, Switzerland, the United States, Canada, Australia, and New Zealand.

Moreover, in case of deaf competitors the gun triggers with light and the enclosed cap is exploded.

In older days, whenever the start official triggered the gun, the sound was heard by the competitors at different times as the velocity of sound travelled approximately 3 milliseconds per meter. Due to this, the competitors positioned near the pistol heard the sound earlier than others positioned at a distance. Nowadays, the starter pistols are linked with the starting blocks and microphone that transmits the sound to speakers, and all competitors may hear the sound at the same time. Hence, there will be fewer chances of the false start. To note the reaction time of each competitor, an advanced computer system is also linked with the gun and the starting blocks.

These guns were used officially at the starting games in 2012 Summer Olympics held at London.

The officials in American and Canadian Football formerly used a starting pistol to end each quarter of a game. In National Football League (“NFL”) this was first used in 1924, to avoid confusion with the whistles and air horns that were used for other signals when the stadium clock did not show the official time. Later the stadium clock became the official game time and the NFL discontinued the gunshot in 1994.

Other than in sports, the starter pistols are also used in films and in TV or stage shows.