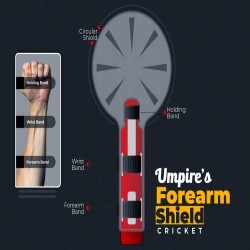 During a World T20 warm-up match of Australia and West Indies in 2016, Umpire Bruce Oxenford revealed a unique protective gear tied on his left forearm, attracting numerous eyeballs on the object. Where baseball and ice hockey officials were using helmets for protection; ICC was looking forward to some safety gadgets for the on-field standing officials to rescue them from fireballs and this unique hand gear introduced by Oxenford left everyone amused. This shield is used to parry and block the dangerous shots in the direction of officials while ongoing matches.

This protective gear was also used during the one-day match between England and Sri Lanka and in the Indian Premier League match between Gujarat Lions and Royal Challengers Bangalore in April in the same year. In 2016, Australian umpire John Ward became the first official to wear a helmet in an international match during the fourth ODI match between Australia and India in Canberra.
*We crave more modifications and accuracy. Help us do that with your valuable feedback. No responsibility is taken for the authentication of the data.