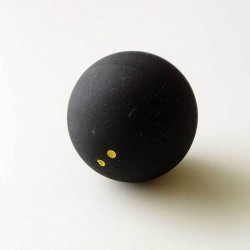 Squash balls are hollow spherical balls with a diameter of 39.5 mm to 40.5 mm and weigh around 23 to 25 grams. The balls are made from two rubber pieces that are glued together and polished to provide a matte finish. A variety of squash balls are used depending on the temperature, atmosphere, standard of the match along with the level of experience of the players.

The professional or experienced players prefer a ball that produces less bounce; on the other hand, the less experienced players use balls with more bounce. The rubber composition is the key element that aids in the bouncing property of squash balls. The balls generally bounce more in high temperature and therefore are vigorously hit plenty of times at the beginning of the match to make them warmer from their initial cold state. Cold balls don’t bounce high and therefore are less preferred.

Squash balls also have small coloured dots on the surface. These dots indicate their level of bounciness and thus denote the standard of the match in which these are used. Usually, the blue dotted ball is used by novice players, red-dotted by medium-level players, yellow-dotted by advanced level players and double yellow by the pro-level athletes. Orange-dotted balls are also used but at higher altitudes.

According to the World Squash Federation, the squash balls are required to have a diameter ranging between 39.5 mm to 40.5 mm and should weigh between 23 to 25 grams. These balls are made from raw butyl rubber along with various other different natural and human-made materials and powders. The normal temperature of the balls with which the players play is 45 degree Celsius as it serves as an equilibrium temperature for the energy lost externally to energy lost inside the rubber ball. Sulphur is also added to increase the vulcanizing property of the rubber.

The squash balls were first introduced in the mid-19th century. Later, the trial and error method led to the production of various types of squash balls. By the 1920s, standardization of squash balls and the courts took place. Later, the Avon India Rubber Company started producing squash balls of variable sizes from 3.65 cm to 4.3 cm in diameter. They also produced balls with matt finishes or varnished them to make them glossy. The Silvertown Company also produced glossy balls with the black-enamelled surface with a diameter of 3.9cm.

In 1926, the official specifications regarding squash balls were recorded. In 1960, Slazenger introduced synthetic balls made from butyl rubber. In the early 1970s, Dunlop introduced the coloured dot balls which are still regarded as the best balls to play squash. Traditionally, the sizes of the balls depended on the court size, but in recent times, the balls used to have the same universal specifications.