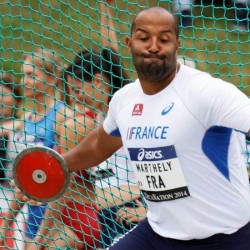 Discus throw is a popular sport across the world in which the players are required to throw a disc (discus) as far as possible in a marked region. In official tournaments, the players are required to throw the disc from a circle having a diameter of 2.5 metres (8.2 feet). The athletes then aim for a 34.92-degree sector marked to complete the throw.

The athletes usually spin the disc via their index finger or the middle finger of the throwing hand. The disc then spins in a clockwise motion if spun by right-handed players and anticlockwise for left-handed players. The objective while throwing is to achieve maximum momentum in the disc and the distance is determined by the aerodynamic trajectory imparted by the thrower.

Manufacturing of the Disc

The discs are usually made from materials like plastic, wood, fibreglass and metal. The discs have a metallic rim and core to maintain the weight. The discus throwers didn’t have any specialized grip; therefore, the rim always has no roughness and irregularities and must be smooth enough.

Official rules regarding the Disc

According to the IAAF, the playing discus should have the following properties -

History and Evolution of Discs in Discus Throw

The game of discus throw has appeared in the 5th century BC and was developed in the ancient Greek and Roman era.  In 776 BC, it was a part of the first Olympic Games. In earlier times, the discs were made from iron and bronze. The winner of the competition was also awarded the disc. The discs were massive in weight and were subjected for a shorter range of area. The ancient discus throwers used to follow an overhead throwing position with a slight bending motion while throwing the disc.

The modern discs can be manufactured from various natural or artificial materials and are lighter in weight compared to ancient discs. They are more durable and have a smooth surface. Nowadays, solid rubber discs are also used for training purposes. The rubber discs are lighter and cheaper and have an equal distribution of weight. The players don’t require taking the discs over their head anymore and threw it with a half-turning position.