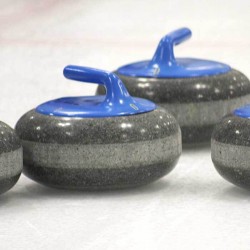 Curling is a sport where two teams take turns sliding circular Granite stones toward a target on a sheet of ice while the other team members sweep the ice in front of the stone to warm the ice and reduce the friction. This sport is named Curling after the unique turning at the end of the stone's path on the ice that requires a lot of strategy and technique; therefore it is also regarded as "Chess on Ice."

Every year when the Winter Olympics start, the one sport that mesmerizes every other person in the audience is none other than Curling. This is so because the movement of the Stone is very unpredictable.

So, to know how the Curling Stone curls, we need to understand the mechanism, factors and learn more about the critical piece of Equipment.

How are Curling Stones made?

The Curling Stone is the most surprising equipment of the sport:

History and Evolution of Curling Stones:

Curling is an ancient sport that originated in the 16th century in Scotland. The first official record of Curling Stones was found in 1511 in the Scottish regions of Stirling and Perth. Later in the 1600s, stones with handles were introduced for a smoother playing experience. In 1838, the Grand Caledonian Curling Club drew up the sport's first official rules.

Nowadays, Electronic Handles are fitted in the stone for quickly detecting hog line violations as a modern advancement.  The Electronic Handles on the stones are known as the "eye on the hog."  It electronically detects any false start by the players and eliminates the risk of any human error.

The Modern Stones have a total circumference of 91.44cm (36 inches) and a height of 11.43cm (4.5 inches), as specified by the World Curling Federation (“WCF”). This advanced technology has made the stone more feasible with a uniform surface.

Where does the Curling Stone for the Olympics come from?

The two major manufacturers of Curling Stones are:


Moreover, Curling Stones are traditionally made of Granite that is readily available in Italy, USA, India, and China. But, for the Olympics, nothing can replace the unique properties of the Granite from the island of Ailsa Craig off of Scotland.  Ailsa Craig Granite is the most demanding and purest form of Granite found in the world and it has fixed shape despite the low temperature of the Curling surface.

The two types of Ailsa Craig Granites used are:

As we know, the tendency of rotating and moving objects to travel along a curved trajectory is essential in many sports.  In Curling, the main objective is to get the team’s stones into the Bull’s eye (‘House’ at the end of the ice sheet).  However, the game-changer in the Curling sport is the Curling Stone itself.

Let’s understand the mechanism with an example:

Suppose we take a circular object (let it be a bowl) and turn it down. Now, spin the bowl in an anti-clockwise direction and slide it along a surface. We observe:

The bowl curled to its ‘Right’ rather than Curling in the direction of the rotation, which happened because the bowl tips over while moving.  This puts more pressure (Pressure= Force/Area) in the front than the back leading to asymmetric friction that ultimately causes the curl. But, a Curling Stone is an exception to the above phenomenon.

Moreover, the essential characteristic of the game is a curled trajectory of the rotating Curling Stone, and it is well-known among the players that:


Because greater the amount of rotational velocity at the time of release, lesser the stone will curl. This type of effect is implemented in the game to reach the target spots and let the stone travel farther.

Factors influencing the Curling of the stone:

Now the question arises - "Why is Curling Stone an exception to the above mechanical phenomenon"?

The Curling Stone is an exception to the theory mentioned above because of the ice prepared for Curling and the environmental factors.

How is the Ice prepared?

The preparation of ice takes place in two steps:

Step 1 - Pebbling:  In this process, deionized water is sprinkled on to the ice sheet with the help of a sprinkler nozzle and is allowed to freeze.  The deionized water is prepared by Reverse Osmosis (It is a water purification method through which unwanted ions/molecules are removed from water by passing it through a partially permeable membrane).  These water droplets freeze and form bumps known as pebbles, which reduce the friction and help the stones to travel farther.

Step 2 - Nipping:  After pebbling, the top of the pebbles is nipped using a metal blade to create a smooth, uniform running surface.

When a Curling Stone passes over the pebbles, the weight of the stone gets distributed equally among the nipped top of the pebbles. This results in increased pressure at the Curling Stone front-end as it is released and leads to melting of the ice. The melted ice acts as a lubricant to the surface and helps in reducing the frictional force that finally lets the Curling Stone curl in the direction of its rotation (Since Pressure is inversely proportional to the Melting point).  Moreover, other than this, the players use the Curling Broom in clearing the ice bumps on the surface by sweeping according to how much they need to redirect the stone.

The temperature and humidity play a vital role in Curling.

The surface of the ice sheet needs to be kept at a constant  5 degrees Celsius (23 degrees Fahrenheit) temperature. Therefore, the humidity of the atmosphere in the rink is kept low to prevent condensation of water on the ice, which, when increased, can adversely affect the performance.

The temperature of the Running Band is kept the same as the ice to ensure fair play because if the Running Band is warmer than the ice surface, then there would be a gradual increase in the molecular forces between the water molecules, increasing the friction with the ice. 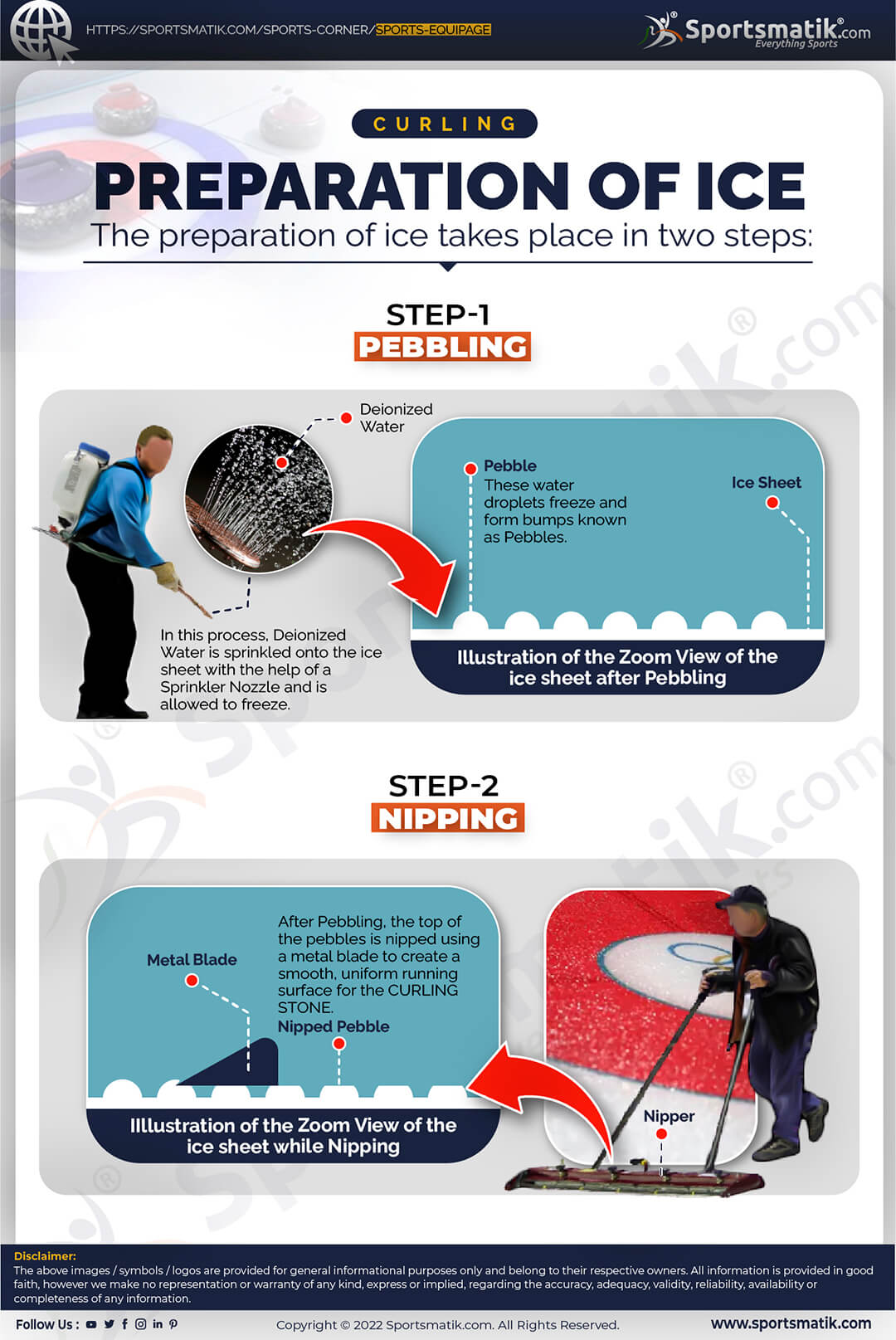