Pakistan's Arshad Nadeem on picking Neeraj Chopra's Javelin: All the Javelins were provided by the IOC 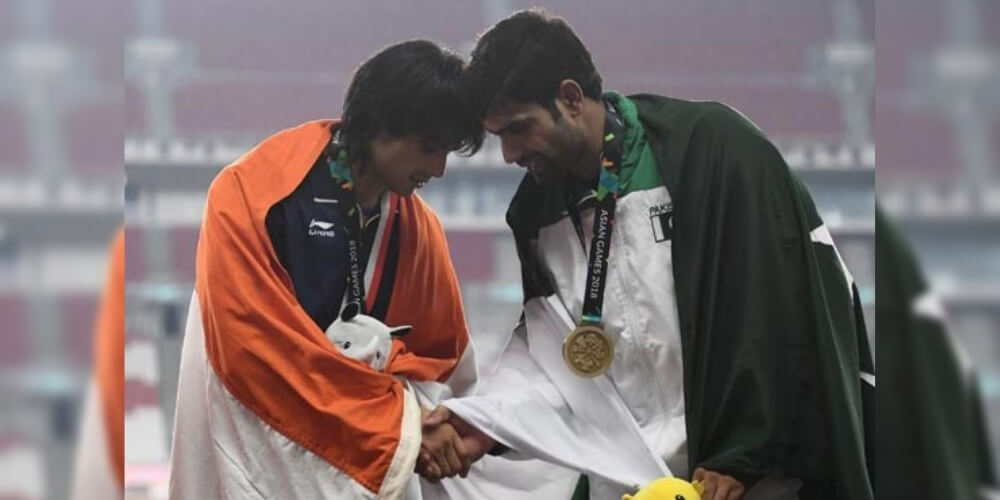 The day after Olympic gold medalist Neeraj Chopra talked about the controversy caused by an incident in the Tokyo Olympic javelin finals earlier this month, the incident involved Pakistani javelin thrower Arshad Nadeem, who now claims that the International Olympic Committee provided all the javelin, and he began practising with one javelin in the rack.

"Actually, javelins were provided by the Olympic committee. I was practising with a Javelin, and Neeraj came to me and said it was his Javelin, so I gave him," Nadeem stated this through Arysports.tv.

"I am not sure whether that Javelin was provided to the management by India or not. Maybe it was his favourite, and he wanted to throw with it. That's why he came to me and ask for that Javelin," added Nadeem.

Indian athlete Neeraj Chopra, who won the gold medal at the 2020 Tokyo Olympics, claimed in an interview with The Times of India that Arshad Nadeem was walking around with his javelin before the final competition.

"I was searching for my javelin at the start of the final. I was not able to find it. Suddenly, I saw Arshad was moving around with my javelin. Then I told him, 'Bhai give this javelin to me, it is my javelin! I have to throw with it'. Then he gave it back to me. That's why you must have seen I took my first throw hurriedly!" Neeraj told TOI in an interview.

Neeraj Chopra then clears the air over the Arshad Nadeem incident on Thursday (August 26) and asked everyone not to carry out "vested interests and propaganda" on this matter in the future.

Neeraj posted a video message on his Twitter handle on Thursday (August 26) and said:

Neeraj also tweeted, "I would request everyone to please not use me and my comments as a medium to further your vested interests and propaganda. Sports teaches us to be together and united. I'm extremely disappointed to see some of the reactions from the public on my recent comments."

This caused Nadeem to face a lot of criticism from Indians and fans of Neeraj Chopra.

As for Neeraj, he has attended various events and functions since returning from the Tokyo Olympics and also fell ill during this period.