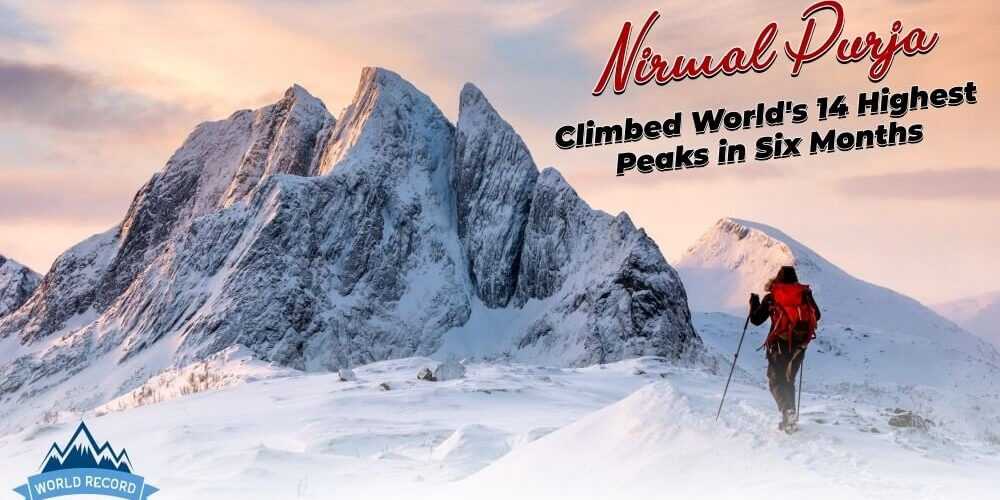 “Mission Achieved!” was the simple message on his social media post when he summited Mount Shishapangma on Oct 29 2019.

That feeling is like you conquered the entire world, and this impossible thing became possible by Nirmal Purja, who is a Nepali mountaineer and former British marine who has smashed the record of summiting the world’s 14 highest 8000m peaks in just 6 months and 6 days on Tuesday (Oct 29), broken the previous record of almost eight years.

Well, no doubt that it took other mountaineers years to complete. Nirmal (36-years-old) who is also known as Nimsdai, achieved his goal early morning on Tuesday while he reached the top of Mount Shishapangma (8027 m) in Tibet with his Sherpa team.

In 2003, Nirmal joined the British Army, and after six years, in 2009, he became a Royal Marine. Nirmal’s mountaineering career began in 2012, when he walked to Everest Base Camp, instead of returning from Everest base camp as planned, he decided to climb the Everest peak. In 2018, he was awarded the MBE (a civilian honour) by the Queen.

Previously, Jerzy Kukuczka, a polish mountaineer, summited the same 14 eight-thousander peaks in 7 years, 11 months and 14 days in 1987. Whereas the South Korean mountaineer Kim Chang-ho, finished the challenge in 1989 but he was one month faster than Jerzy Kukuczka.

Nirmal began his ambitious campaign “Project Possible” by Elite Himalayan Adventures (his own company) in this year of April in Nepal, where he attempted the first part, in which he climbed Annapurna, Dhaulagiri, Kanchenjunga, Everest, Lhotse and Makalu in just one month.

Those peaks are the highest of the eight-thousander. Nirmal climbed Everest on May 22, 2019, where his picture of the traffic jam at the top of the summit of Everest gained worldwide attention.

During his first part of the attempt, Nirmal rescued four other climbers, from which three of the rescue missions he mentioned as “suicide missions” - and has, in his own words, “bled from every angle”.

After June, Purja headed toward Pakistan in July to attempt his second part, where he first captured the arduous Nanga Parbat (8125 m), after he climbed Gasherbrum I, Gasherbrum II and K2 (the 2nd Highest Mountain) in the same month.

He fought with his sleep deprivation to achieve his target, and he has been almost sprinting up and down five of the highest peaks of Pakistan. He ended his second part of the attempt by summiting Broad Peak at the end of July.

He began the final part of his attempt in September, where he climbed the tops of Cho Oyu and Manaslu peaks in just a week. After that, Nirmal relaxed in Kathmandu and waited for permission to ascend the final peak of Shishapangma in the Tibet region of China. After a long period, his permit was granted by China on Oct 15 when the Nepali government approached the China government on behalf of him

And finally, that day came which every mountain lover eagerly waits for! Nirmal accomplished his mission by summiting the top of Shishapangma this Tuesday, Oct 29 in Tibet. And that’s how he created the history in just six months.

Highest 14 Mountains climbed by him: