India’s Rahul and Pakistan’s Furqan will fight today at MMA’s ONE: Edge of Greatness event 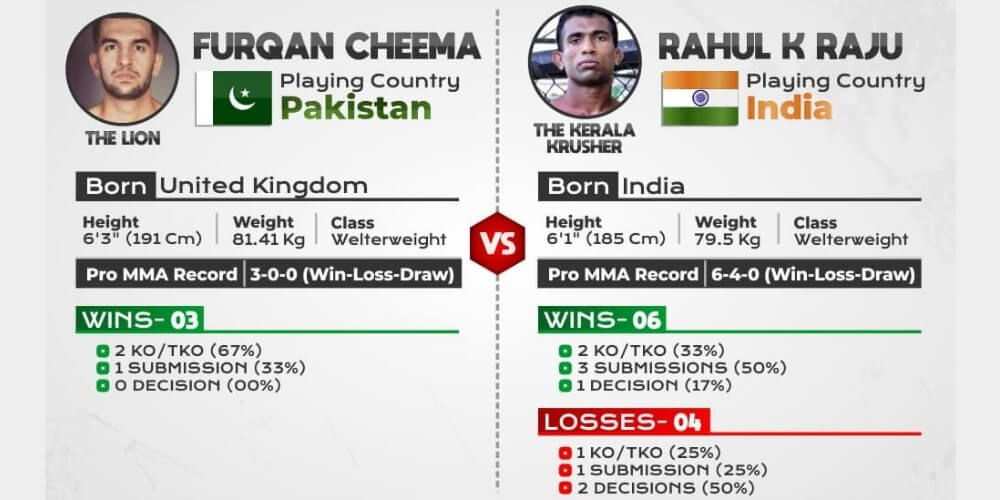 It’s going to be another phenomenon event of the world’s most breathtaking martial arts action ONE Championship, which returns to the Singapore Indoor Stadium with ONE: Edge of Greatness!

The ONE: Edge of Greatness line-up this Friday, 22 November, characterizes a few of The Home of Martial Arts most admired submission masters, counting a pair of Brazilian Jiu-Jitsu World Champions, and mixed martial artists that have demonstrated their finishing ability in the Circle.

In the spectacular event between the sporting rivalry from the ages, Indian veteran Rahul K Raju who is also known as “The Kerala Krusher” will fight against Pakistan’s phenom Furqan “The Lion” Cheema, tomorrow Nov, 22 at ONE: Edge of Greatness event. With such possibility of thorn collision, get prepared for a dazzling showcase of marvellous striking.

There are as of now 11 battles on the card after ONE Championship found a substitution for Ahmed Mujtaba, Rahul Raju’s original rival.

Let’s have a look at the career stats of both

Rahul (6-4) hails from India but is based in Singapore. Rahul lost his first three fights for the promotion but is coming off a submission win at ONE: Enter the Dragon.

Furqan (3-0) comes from Pakistan but is based in England. Furqan moreover holds an 8-1 amateur record and has not lost a battle since 2013.Nickname- The Lion