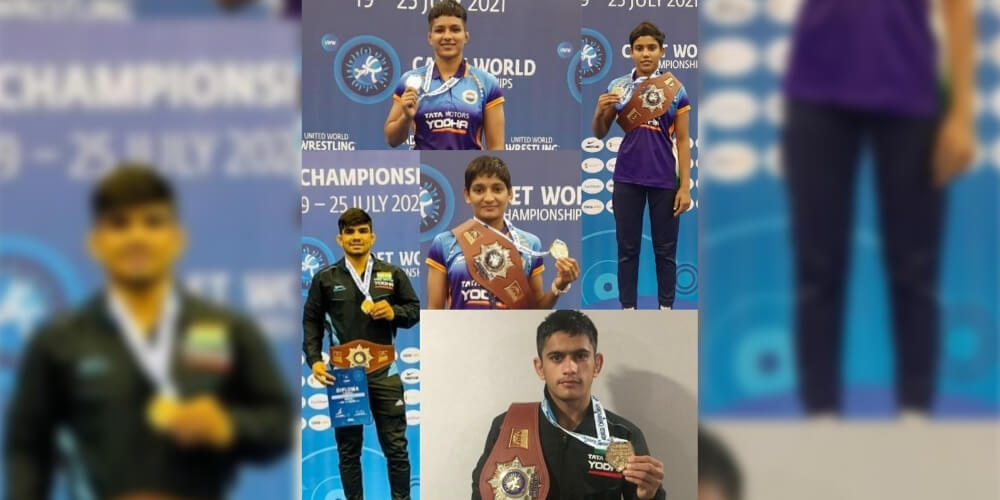 Indian wrestlers have won as many as 13 medals at the World Cadet Wrestling Championships, 5 of which are gold medals.

Prime Minister Narendra Modi congratulated the Indian contingent in Budapest on Twitter on Monday and informed the number of medals that India had won in the competition.

PM Modi tweeted: "Our sportspersons continue to make us proud. India wins 13 medals, including 5 Golds at the World Cadet Championships in Budapest, Hungary. Congratulations to our team and best wishes for their future endeavours".

Our sportspersons continue to make us proud. India wins 13 medals, including 5 Golds at the World Cadet Championships in Budapest, Hungary. Congratulations to our team and best wishes for their future endeavours. pic.twitter.com/3HlOrKTtDB

The trio pushed the Indian women's team to second place with 139 points, with the USA leading the way with 149 points.

Tannu won the gold medal in the 43kg category as her opponents failed to score a single point against her in all four matches.

In the final, Tannu defeated the Belarusian Valeryia Mikitsich by a fall. As the game progressed, Tannu attacked from the opponent's left side.

A remarkable performance by India at the World Cadet Championships in Budapest, Hungary! pic.twitter.com/0Ihk7bfLVX

The scoring in the final was slow as the participants got entangled in the body locks.

Priya Malik won the final against Kseniya Patapovich in the 73 kg category with a score of 5-0.

Greco-Roman wrestler Ankit Gulia defeated the Kazakh wrestler by 9 points in the 65 kg event and won the bronze medal.

Together with three gold medals, the wrestlers Antim and Varsha won bronze medals in the 53 kg and 65 kg categories, respectively.