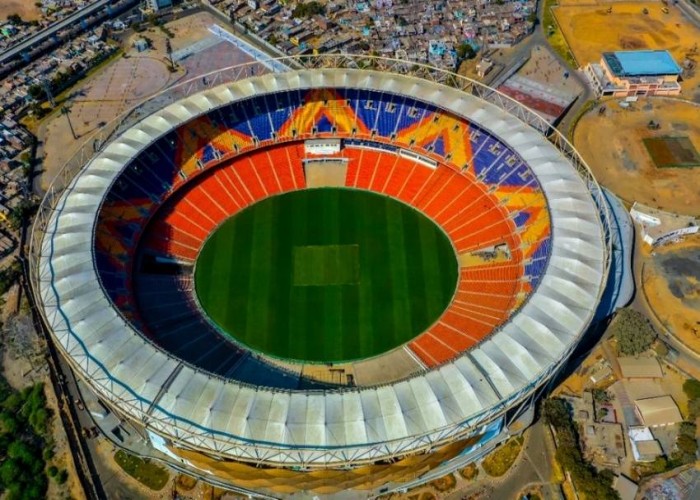 The Narendra Modi Stadium is the first public structure in India to be named after Prime Minister Narendra Modi, which is located inside the Sardar Vallabhbhai Patel Sports Enclave in Ahmedabad. As of 2022, it is the largest cricket stadium in the world, with a seating capacity of 132,000 spectators.

The first test match was hosted in November 1983 and has witnessed some memorable achievements in the field such as - Sunil Gavaskar scored his 10,000 Test runs against Pakistan in 1986–87, and seven years later, Kapil Dev claimed his 432nd Test wicket to become the highest wicket-taker in the world in 1994 by surpassing Sir Richard Hadlee. In addition, the stadium hosted Cricket World Cup in 1987, 1996, and 2011. It should also be mentioned that the stadium has hosted its first-ever pink-ball Test match between India and England on February 24, 2021.

Formerly known as Gujarat Stadium, it was renamed in tribute to Sardar Vallabh bhai Patel, India's first Home Minister and Deputy Prime Minister. In 1982, the Government of Gujarat donated 100-acres of land on the banks of the Sabarmati River to build a new stadium. The construction was completed within nine months and hosted its first ODI in 1984 – 1985 played between Australia-India, where India was defeated by Australia.

The stadium became the centerpiece of the ICC Champions Trophy in 2006 and hosted five of the 15 matches which were played here. To host the tournament, the stadium was renovated to add three new pitches and a new outfield. Floodlights and covered stands were introduced to the stadium as a part of the renovation program.

Sardar Patel Stadium has always been one of the leading venues, whenever India has hosted the Cricket World Cup, including the first match of the 1996 World Cup which was played between England and New Zealand. Although only one game was played in 1987 and 1996, but later, in 2011 World Cup, it has hosted three matches, including the quarter-final between Australia and India. As of 19 August 2017, Sardar Patel stadium has hosted 12 Tests, 23 ODIs and 1 T20 matches.

Gujarat Cricket Association under the visionary leadership of GCA President and current Prime Minister Narendra Modi decided to reconstruct the stadium and make it the largest Cricket Stadium in the world. In October 2015, the stadium was closed and demolished for reconstruction. The total cost of reconstruction was estimated to be ₹700 crores. However, the final cost was reported at ₹800 crore. The redevelopment was originally planned to be completed in 2019, but it was finished in February 2020.

The president Ram Nath Kovind inaugurated the stadium in the presence of home minister Amit Shah and sports minister Kiren Rijiju, amongst a host of other dignitaries on 24th February, 2021.

“As children, we used to dream about the world’s largest stadium in India. And now as sports minister, my happiness knows no bounds that this has finally happened,” said Rijiju at the inauguration ceremony.