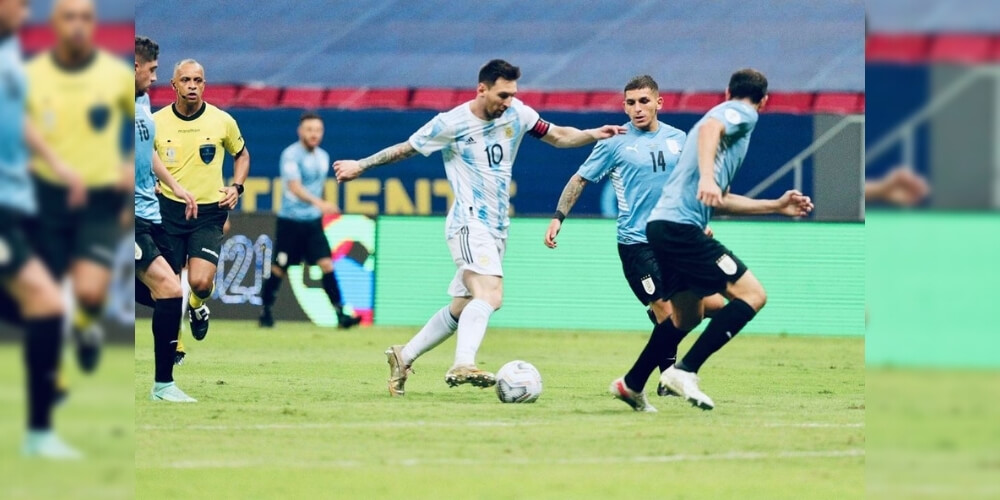 The Argentine legend Lionel Messi led his team to the quarterfinals of Copa America 2021, as Group A winner Argentina registered an easy victory over Bolivia 3-0 in the group stage finale in cold, rainy Cuiabá.

With this game, Messi set a historical all-time appearance record with his 148th cap on behalf of the country, and he marked the occasion with his classic performance style.

Argentina dominated the game from the start and broke the Bolivian defence in just six minutes, thanks to Messi's excellent pass and Papu Gomez's excellent finish to the goal.

The Albiceleste continued to dominate the game and created opportunities against the worst team of the tournament. Gómez was tipped by Ibáñez in the penalty area to claim the penalty. Messi came forward and scored easily, rewriting the score to 2-0.

Then the final goal was scored in the match, when Sergio Agüero delivered an excellent pass, putting Messi one on one with the goalkeeper, and the captain scored a magnificent chip from outside the penalty area for the third goal.

Messi became the most capped international player for the Argentina national team. Messi, 34, kicked off the Copa America match against Bolivia at the Arena Pantanal on Monday, marking his 148th national appearance for Argentina and breaking the previous record set by former defender Javier Mascherano.

Messi made his Argentina debut in 2005, winning a 2-1 friendly against Hungary. He was sent off during the match after elbowing his opponent.

The Barcelona striker, who also holds the all-time record for Argentina highest goals (73 goals), aims to break two South American records: Pele's as the top goal scorer of the national team (77 goals for Brazil) and Chilean Sergio Livingstone mark of 34 for most Copa America appearances (Messi has 31 appearances).

Diego Maradona had scored 32 goals in 87 matches for Argentina, including his 1986 World Cup triumph. Messi, despite his impressive individual stats, has yet to win the top title for Argentina.