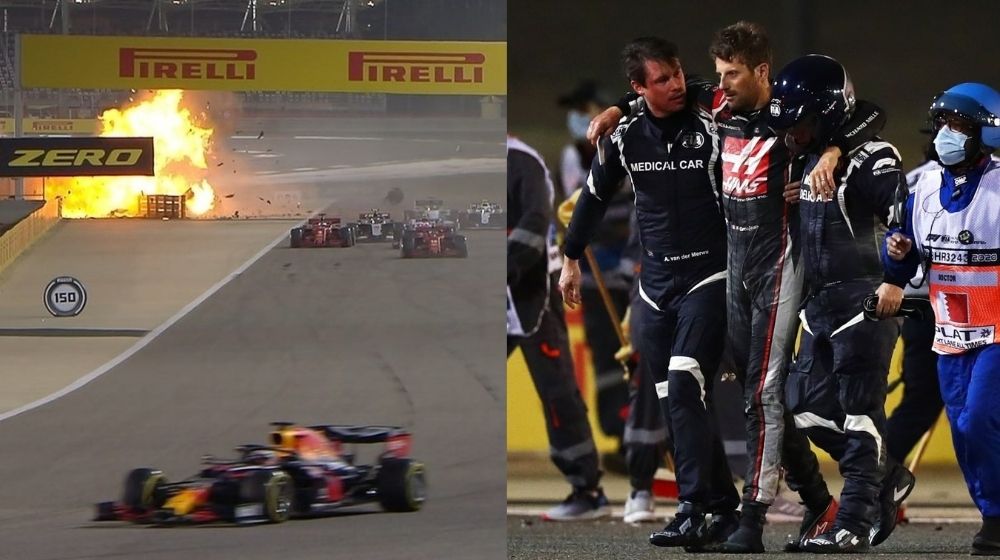 The seven-time world champion, Lewis Hamilton used a safety car at a controlled speed at the finish as he won his 95th record-breaking race at the Bahrain Grand Prix on Sunday, overshadowing Frenchman Romain Grosjean's horrific crash. However, Grosjean escaped from the crash relatively unscathed.

Romain Grosjean said that he was okay after surviving the high-speed crash and fireball burning at the opening lap of the Bahrain Grand Prix. Racing officials and drivers praised the modern safety developed for Formula One system.

Grosjean's car broke sharply at a speed of about 250 km/h (155 mph) during the opening lap, hitting a steel guardrail with a bent front and hitting a barrier. The 34-year-old Grosjean was trapped in the cockpit and flew under the barrier, the car burned, and the impact split it in two, but he was able to escape with only light burns on his hands and ankles.

After Grosjean survived a terrifying crash, the race was delayed for about 90 minutes. After the crash, he was taken to the hospital on suspicion of a rib fracture and suffered burns on his limbs.

"Hello everyone, just wanted to say I'm okay, well, sort of okay. Thank you very much for all the messages," said Grosjean in a video posted on social media from his hospital bed.

Then, after contacting Daniil Kvyat's Alpha Tauri during the restart, another accident occurred in which Racing Point driver Lance Stroll made an upside-down excursion, and the safety car intervention began. The Russian was given a 10-second penalty.