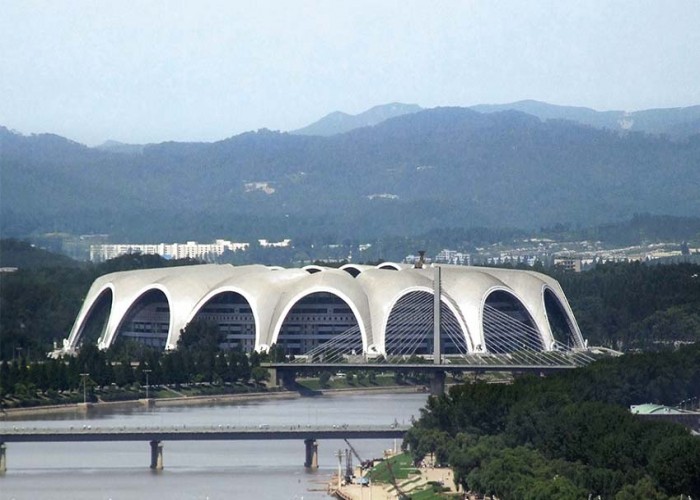 Rungrado May Day Stadium is present on Rungra Island, Pyongyang, North Korea that is spread over an area of 20.7 hectares (51 acres). The stadium is used to host football matches and some athletics events and moreover it is often used for the mass games of the Arirang festival.

History of Rungrado 1st of May Stadium

The Rungrado 1st of May stadium is the second largest stadium in the world with a capacity to hold 1, 14,000 audience at a time (First being India’s Narendra Modi Stadium) and is the largest stadium built after the 1988 Summer Olympics in South Korea. The stadium had organized its first major event on the day of opening that is the 13th World Festival of Youth and Students in Pyongyang on 1st May 1989.

It was constructed to present North Korea as the legitimate Korean State. This stadium is frequently employed for massive performance. Apart from massive performances, the stadium is employed for frequent celebration of President Kim II-Sung and North Korean State. In 2007 Guinness Book of Records registered the stadium for hosting the largest gymnastics display of 1,00,090 participants.

Collision in Korea was the largest professional wrestling event with pay per view held at the Rungrado stadium from 28 to 29 April, 1995 with a record attendance of 150,000 to 190,000 respectively.

In September 2018 Inter-Korean summit was held in Pyongyang with up to 1,50,000 spectators. President of South Korea Moon Jae-in gave speech with Chairman Kim Jong-un for unity, cooperation and peace in the region.

In 2019 the stadium was chosen to host the Chinese Communist Party General Secretary Xi Jinping to special Grand Mass Gymnastics and artistic performance known as the “Invincible Socialism” on the occasion of the 70th anniversary of China-North Korea relations.

The May Day Stadium resembles like an open parachute and it is designed based on a blossomed magnolia, the national flower of Democratic People’s Republic of Korea (“DPRK”).

Moreover according to the DPRK official figures, the stadium consists of 16 arches shaped in a circle and the roof with a height of 60 meters (200 ft.) above the ground.

Even though it has held several soccer and athletics competitions, it is possibly best known as the place for the Arirang Festival, a colossal gymnastics and artistic performance that includes more than 100,000 participants.

The May Day stadium is much more than a football stadium and has a swimming pool, table tennis room, running tracks, dorms for athletes, mini golf course, medical facility rooms, indoor training facilities, dope test rooms , offices for referees and coaches and a lot more.