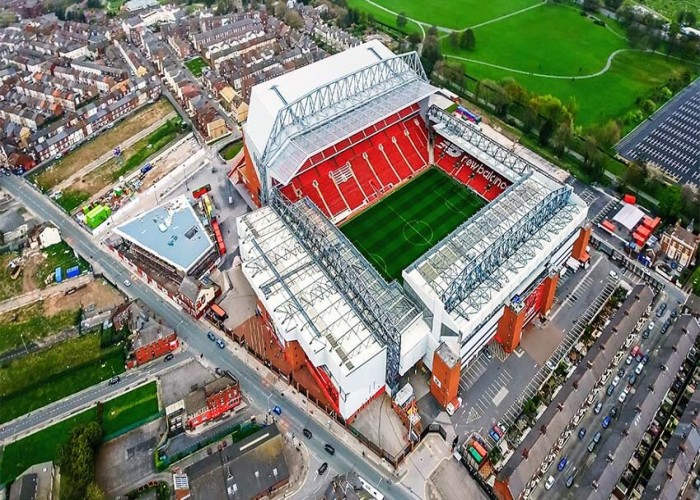 It was established in 1884 and has hosted leagues and international soccer events such as UEFA Euro 1996 and other sporting events as World Featherweight Title (1934), 1991 World Club Challenge, Super League II,  2016 Rugby League Four Nations final and much more. The stadium got constructed according to international standards.

Apart from football matches, this multi-functional stadium has also hosted live concerts of celebrities such as the Kaiser Chiefs, the Zutons, and Paul McCartney.

The Anfield word is derived from Old and Middle English words that mean “a field on a slope”. The name supposedly suggested being derived after the influx of Irish people in 1850. Anfield opened in 1884 which was initially owned by John Orrell, a friend of John Houlding, the founder of Liverpool F.C.

John Houlding was also a member of Everton F.C. before forming the Liverpool. F.C. John Orell rented the stadium to the Everton F.C. in exchange for a small rent.

In 1889, it hosted the British Home Championship match between England and Ireland. Later on, in September 1888, Anfield’s first league match was played between Everton FC and Accrington FC, and the home team (Everton FC) became the first league champion of Anfield in the 1890-91 seasons.

A bronze statue of former Liverpool manager Bill Shankly was erected at the entrance of one of the stands.

The Anfield Road end and Sir Kenny Dalglish Stand both are two-tiered, while the Kop is single tiered and the Main Stand is three-tiered. The Kop is the most-renowned stand at Anfield among home and away supporters, with the people who occupied the stand referred to as kopites.

In 1895 new stand was constructed for holding 3,000 more audiences. Architect, Archibald Keir Leitch, had designed the stand that had a distinctive red and white gable. He was famous for preparing architecture designs for many football stadiums in Great Britain.

The stadium comprises of 53,394 seats that are divided between four stands: Main Stand, the Anfield Road end, the Sir Kenny Dalglish Stand and the Kop.

Moreover, the redevelopment of Liverpool FC’s Anfield stadium is expected to be ready in time for the 2023-24 seasons. The plans to increase the capacity of the stadium to 61,000 by adding 7,000 seats to the Anfield Road Stand were backed by councilors in June 2021.