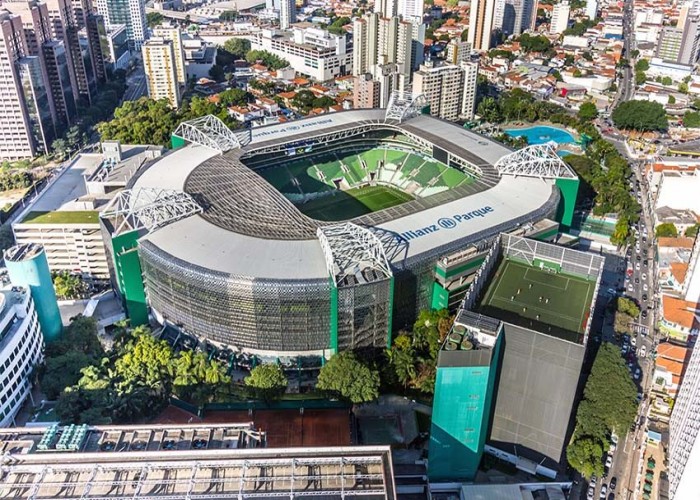 Allianz Parque is a multi-purpose stadium in Sao Paulo, Brazil, built especially for football matches and for shows, concerts, corporate events. This stadium is also known as Palestra Italia Arena.

The Allianz Parque stadium has one of the most modern multipurpose spaces in the country. The stadium is built such that it meets all the FIFA’s standards. The construction started in 2010 and the planning was made by Portuguese architect Tomas Taveria.

Moreover, the new stadium was built by the company WTorre Properties / Arenas that was located on the same place of the old Palestra Italia Stadium also known as Parque Antartica.

The transformation of the earlier Palestra Italia Stadium in arena is the result of an agreement that was signed between Palmeiras and company WTorre Properties / Arena, belonging to WTorre Group. It was even stated that the WTorre will manage the site for thirty years and the Palmeiras will profit 100 % with the ticket sales at football matches.

As per the agreement the Palmeiras and WTorre, all the expenses for the use of the arena, such as water, electricity, security, cleaning, insurance, lawn maintenance shall be carried by the entrepreneur. At the end of this 30-year period, Palmeiras will integrate the whole enterprise by putting an end to the deal with the company.

The architect "Edo Rocha" is responsible for the arena project as the entire façade was to coat with drilled stainless steel that showed up an optical art effect with hollow spaces that resembled a wicker basket.

The Arena roof is fully integrated into the facade that is without the pillars to increase the space for visitors. The playground is installed with a transparent polycarbonate cover to allow the maximum light to reach the ground.

When referring to the environmental issues, the Allianz Parque has a system to conserve rainwater that falls on to the roof of the stadium, which is twenty three thousand square meters.

The Allianz Parque has 43,713 covered seats including 25,395 lower seats, 14,888 upper seats and 3,430 in the cabins. Moreover, the Arena consists of 188 private boxes from 12 to 21 seats, a panoramic restaurant, cafes, shops, convention center with modular structure for up to 1,500 visitors, media center for up to 1,000 media members, a multimedia memorial space with the history of the club and an adjacent covered parking for up to 2,000 cars, with exclusive spaces for motorcycles and bike rack. Multiple events such as shows and concerts can accommodate up to 55,000 spectators.

The Allianz Parque complex is spread over ten thousand square meters over four floors and is served with three elevators. Moreover, a gymnasium is located downstairs to host basketball, futsal and volleyball games with a seating for approximately 1,500 fans.

In 2015, the Arena held a friendly match between Brazil and Mexico in order to prepare them for the 2015 Copa America. The event had been promoted by Anschutz Entertainment Group (“AEG”) Brazil in partnership with the British sports marketing agency Pitch International. The match ended in 2-0 with Brazil being the winner. Since 2014 FIFA World Cup, it was the first game of the Brazilian team in the country.

In 2015, the Arena hosted the final of the League of Legends Brazilian Tournament, a Riot Games event (An American video game developer, publisher and esports tournament organizer).

Other than Sports events