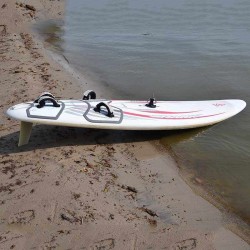 The windsurfing boards are mostly between 2m to 5m in length and are strong, robust and able to withstand heavy wind and water current. The windsurfers are manoeuvred by tilting and swivelling the mast and sail and by cutting motion of the board. There are usually two types of boards used in windsurfing; the longboards and shortboards. The longboards are generally more than 3 metres and are equipped with a daggerboard. The daggerboard is retractable and is placed in the centre of the board. On the other hand, the shortboards are smaller than 3 metres and are designed for specific conditions.

Beginner boards - The beginner boards are also regarded as the funboards and are equipped with a daggerboard. The boards have high volume and stability.

Freeride - The freeride boards are used for straight-line sailing with fewer turns at planing speed. It is widely used for recreational sailing purposes. The boards are used in slow-flowing water (flatwater). It has a volume ranging between 90 litres to 170 litres.

Formula windsurfing class - The boards are shorter with 1 m width and have sail up to 12.5 m2 in size. The boards can excel with both upwind and downwind abilities.

Slalom boards - The slalom boards offer smooth manoeuvring and high speed; these are shortboards and can be used easily.

Speed boards - The speed boards have a higher speed and have a narrow and sleek design.

Freestyle boards - The freestyle boards are wider equipped with higher volume. They are widely used to execute various acrobatic skills such as jumps, rotations, flips etc. and manoeuvring on flat water. The boards are 203 cm to 230 cm long with 80 to 110-litre volume and a width of 60 cm or more.

Wave boards - The wave boards are shortboards, lighter in weight and easily manoeuvrable. The boards have a volume ranging from 65 to 105 litres and are generally 215 to 235 cm long. It is 50 cm to 60 cm wide and can sail in the broader range of circumstances. Suitable board size is selected based on wind speed and sailor’s weight.

Other Equipment used with a Windsurfing Board

Sails - The sails are manufactured from monofilm which is a transparent polyester film, Dacron (woven polyester) and mylar. The sail is tensioned at the tack and the clew. The wave sails are usually 3 to 5.5 square metre, whereas the race sails are 6 to 15 square metre. The race sails offer a high level of speed for sailing.  The two types of sail design used with windsurfing boards are -

Fin - It is an essential part of the windsurfing board and is located on the board’s bottom. It provides directional control to the surfers while surfing. The boards with single fins are the fastest, whereas using multi-fin provides more agility. The wave boards are usually equipped with a multi-fin setup with bigger fins placed at the centre and the smaller fins at the railside (thrusters setup). The fins are also placed in a quad fin setup with two fins in the centre and two at the railside. Some types of fins are -

Footstraps - The foot straps help to plant feet with the board. It avoids the surfers from bouncing off the board with increased speed. It aids in the safety of the participants and also provides more control, especially when gibing or turning on a wave.

Daggerboards - The beginner surfers widely use daggerboards. It is placed in the centre of the board and known as a retractable fin. Daggerboards basically help to stabilize and prevent drifting on the water. Some fins (daggerboards) retract automatically when a certain speed is achieved.

Mast box - The mast box is the specific slot provided on the board to connect with other equipment.

Evolution of Surfboards through the years

S. Newman Darby invented the first windsurfing board in the year 1948. He presented a design of a wooden board equipped with a hand-held sail and rig placed on a universal joint. In 1965, he successfully demonstrated his sailboard at the Chesapeake Bay. Later, Jim Drake and Hoyle Schweitzer modified the sailboards with universal joints. They patented their model and trademarked as a windsurfer. The boards were 12 feet long and were made from lighter polyethylene and weighed around 60 lbs. By 1990, shortboards became popular and dominated the market. In the 21st century, new boards are modified to wider boards, improved sails and easier manoeuvring.