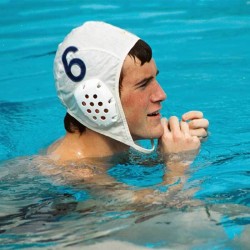 Water polo is an adventurous sport played underwater between two teams. The players generally wear a water polo cap to protect their ears and head from any injury. The cap is a protective headgear that also enables easy detection of the players of the opposing teams. The caps are distinct from each other through the numbers marked on them along with the difference in colour. The home team players generally wear white caps whereas the visiting team players wear dark coloured caps for easy identification. The goalkeepers, on the other hand, wear quartered red caps with number '1' marked on it. The substitute goalies wear caps with number '1-A' marked in the NCAA games or '13' marked in the FINA international games.

The game of water polo is played with the aid of a ball that is passed between the players which therefore increases the chances of hitting others. The water polo cap at the same time provides protection against these kinds of injuries and is a prevalent safety gear to protect bursting of the eardrum. It also prevents entry of water inside the ears and any further damages. Each water cap is light weighted, streamlined and is comfortable to wear.