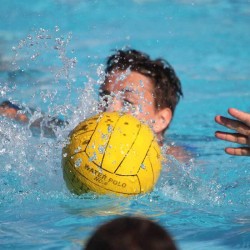 Water polo is a fun, competitive water sport that is played between two teams with the help of a buoyant ball that resembles a soccer ball to a certain degree. The water polo ball is the primary equipment used in the sport and hence has a great significance. The usage of these balls is not restricted to just water polo as these are also used in canoe polo. As the name of the sport suggests, the usage of the ball is inside a water body; therefore, it is required for the ball to be waterproof and possess a good grip. The balls are generally bright in colour and possess a smooth gripping ability and can be tackled by one hand. Some of the major brands producing water polo balls include Mikasa, Molten and Kiefer.

Manufacturing and Sizing of the Balls

The balls weigh around 400 to 450 grams (14 to 16 ounces) that are inflated to varying gauge pressures. The men’s water polo ball is inflated to 90 to 97 kPa (13 to 14 psi) gauge pressure whereas the women’s balls are inflated to 83 to 90 kPa (12 to 13 psi). The balls are made from waterproof material that floats on the water. The water polo balls are categorized according to their sizes as follows. Junior balls used in ‘mini-polo’ are generally smaller balls. These balls don’t have any standard size specifications and are generally green in colour.

Evolution of Water Polo Balls throughout the years

Traditionally, the balls used in water polo were made from rubber and were 3 to 4 inches in circumference. Later in 1936, James R (Jimmy) Smith developed a red ball covered with rubber fabric and had an inflatable bladder to enhance its performance. However, in 1948 the red ball was replaced with a yellow ball for better visibility by the players. In 1956, FINA adopted this ball as their official Olympic ball. Later in 2005, FINA induced some more changes in the yellow ball and used coloured middle stripes of blue, green, red, black or yellow along with the normal yellow stripes. In 2006, the NCAA and National Federation of State High School Association again changed some rules regarding the ball’s colour. According to the new rules, the water polo balls must be yellow with black lines. However, now balls with coloured panels are widely used in special competitions.