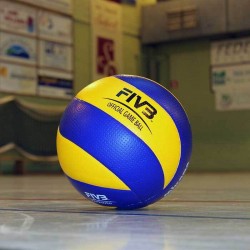 Volleyball is a team sport with a varied fan base and has been a part of schools and colleges’ curriculum. The sport requires only a volleyball ball as its primary equipment. The game is played since the late 1800s and is developed by keeping the ball in central focus. The manufacturing of the balls varies according to its use and the type of floor where it is played (hard court or sand). In all cases, a volleyball ball has eighteen rectangular panels of leather, either synthetic or genuine, arranged on six similar panels. The leather cover is wrapped around the bladder of the ball.

The volleyballs are manufactured in different colours depending on the team’s preference to make it stand out. Each ball has valves present to adjust the internal air pressure. Some of the notable brands of volleyball ball include Tachikara, Molten, Wilson, Baden Sports, Mikasa, Mizuno, Nike etc. After 2008, the FIVB adopted the Mikasa balls as their official indoor ball with dimples and eight panels. It has a softer touch and accurate flight.

Indoor Volleyballs - The indoor volleyballs are made after sticking the panels to the inner lining of the balls to make it look smooth. In this way, the ball becomes more consistent and lighter than the outdoor volleyballs. The indoor balls are usually solid white or bright yellow. The balls have a circumference between 65 and 67 cm (25.5 to 26.5 inches) and weigh around 260 to 280 grams (9.2 to 9.9 ounces). These have an internal pressure of 0.3 - 0.325 kgf/cm2 (4.3 to 4.6 psi). Indoor Volleyballs are further divided into two types:

Outdoor Volleyballs - The outdoor volleyballs have panels sewn on it and holes and threads holding the panels together can be clearly seen. Due to this style of stitching, the balls become more durable but weigh more than the indoor ones. The increased weight of the balls prevents blowing them away in the wind quickly. The beach volleyballs have a circumference of 66 to 68 cm (26 to 27 inches) with a mass of 260 to 280 grams(9.2 to 9.9 ounces) with an internal pressure ranging between 0.175 and 0.225 kgf/cm2 (2.5to 3.2 psi).

Types of balls depending on the manufacturing material

Evolution of Volleyball Balls over the years

The Spalding Sports Company is credited to produce the very first official indoor volleyball made from genuine leather with a circumference of 65 cm. It had an average weight of 270 grams with an air pressure of 0.325 kg/cm2. Later in the early 1900s, synthetic materials were introduced for the first time. These were used to decrease the harness factors developed on the leather surface with time. The synthetic leather also increased the lifespan and durability of the ball and helped in retaining the air pressure for an extended period.

The traditional volleyball ball has three distinct layers. Earlier, the innermost bladder was constructed with the material used in basketballs. It had a disadvantage that it increased the ball’s weight and hindered the flight rate. Later, Spalding Company modified the balls by using latex rubber. The new material made the balls flexible, lighter and resistant to air pressure. Traditionally, the second layer was used to be made of cheesecloth material.

Further, it was modified by using a higher density woven material with improved grade. The last outer layers have always been composed of genuine leather that was later changed by using a synthetic material. Originally, the balls used to have eight panels with dimples, which were ideal for indoor matches. However, in recent times balls with up to 32 panels are used and are ideal to play on any floor from hard-ground to beach and indoor court.

During the evolution of volleyball balls, the valve design also improved with time. Now the players can adjust the ball’s air pressure by releasing the additional air. The air pump also went through several changes as initially, players had to use the cycle pump for bloating the ball. Now players use advanced methods to inject air in the ball’s bladder.