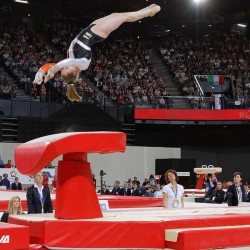 Vault is an artistic gymnastics event as well as an apparatus used to perform various gymnastics skills and the action of performing a vault is known as vaulting. The vaults are major equipment used in artistic gymnastics and are also regarded as a vaulting horse. The gymnasts perform various stunts such as tucking, piking and stretching with the aid of vaults. Gymnasts are usually judged based on their projection, body alignment, repulsion, saltos and twists performed in the event.

The participants usually perform on the vault by running straight towards the springboard and spring directly onto it by using their hands and then lie down. They typically use handsprings to climb on the vault and after balancing on the vaults, land on the ground covered with a mat.

The gymnastics vaults are placed over a slightly inclined metal table. The surface of the table is covered with pads and sponges and the vault is equipped with a spring inside it. The surface provides support to the gymnasts to rest their arms and hands. The Yurchenko-type vaults are always performed with the aid of a safety collar which is placed around the springboard without which a vault is considered invalid and the gymnast will get a zero score.

The vaults were invented by a German gymnastics educator named Friedrich Ludwig Jahn. The earlier version of the vault resembles the structure of a pommel horse without the handles. Due to a resemblance with the pommel horse, it was also regarded as the vaulting horse. The vaulting horses were set up with their long dimension set perpendicularly to the run for women and parallel for men. Soon enough in 1896, the first men’s vault event was included in the Summer Olympic Games. But due to vault’s long structure, the participants faced various difficulties and usually injured themselves.

After plenty of accidents reported between 1988 and 2000, the International Gymnastics Federation (FIG) modified the apparatus to a large extent for safety purposes. By 2001, vaulting tables were started to be used in the official tournaments. The vaulting table was discovered by a Dutch gymnastics equipment company named Janssen-Fritsen. It primarily modified the table as a flat, cushioned surface which was parallel to the ground. The table was designed to have a downward slope at the end of the springboard which is famously known as the tongue. These tables are considered comparatively safer than the old vaults.