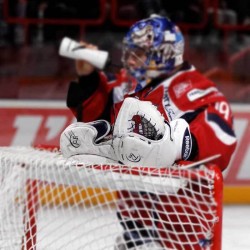 Ice hockey is a popular sport played in western countries with teams trying to earn points and goalie defending the puck. It is required that all of the ice hockey equipment should be functional for winning against the opposing team. One of the necessary equipment for ice hockey is a trapper. It is also referred by several other names such as a catch glove. The goaltenders wear a trapper on their non-dominant hand to assist in catching and restricting the hockey puck.

A trapper can be held in several ways, depending on the goalies preferred style and way. Generally, the young players hold the catching glove with their palm facing towards the shooter while the pro-goalies prefer the traditional “shake hands” position. A goal-keeper has the power to freeze a play or force a faceoff by holding the puck in their trapper. They also have a choice of catching and releasing the puck behind the net or can strike it with their own stick. The trappers were traditionally made with nylon stringing and are still preferred by many players. However, trappers with softer skate laces are also manufactured which doesn’t pull tight constantly like the nylon ones.

Parts of a Trapper

Pocket - The trappers have two different types of pockets -

Cuff - Cuff is an essential part of a trapper that protects the wrist and determines the stiffness of the gloves. It’s a rectangular piece that runs from the wrist to the palm region of the gloves. The two types of cuffs are -

Inner cuff - The inner cuff helps the goalies to fasten the trapper around the wrist. The adjustments help in the proper functioning of the equipment and provide an option of hyperextending the wrist to save the shots.

Palm - The cuff ends in the palm region of the trapper and provides a larger blocking area to the goalie. The palm region isn’t the primary catching area yet assist in funnelling the puck right into the pocket.

Inner glove - The inner glove encloses the goaltender’s hand. It can also be adjusted and usually tightened to eliminate air cushion between the fingers and palm. It has finger stalls which help in determining the correct glove size.

Backhand - The backhand functions as a protective piece and isn’t used for blocking the puck. This part of the trapper is reinforced to protect from slashing while covering the puck.

The trappers are considered to be evolved from baseball gloves. Traditionally, both had the same shape, but later trappers were modified into a highly specific ice hockey equipment, designed for the sole purpose of catching the pucks. Through the years, the trappers have evolved and modified significantly. Some of the notable changes include the addition of “string mesh” in the pocket. The trappers also included “cheater” portion to cover the wrist inspired by the gauntlet-like gloves used in the 1920s.