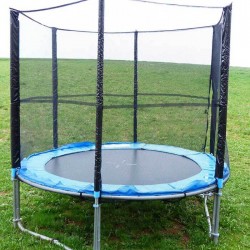 Trampoline is a well-known gymnastics equipment that has a profound place in almost every individual’s childhood. Almost everyone has spent a good time bouncing and jumping over it. However, the equipment has its own major significance in gymnastic events and is widely used for competitive purposes. The equipment is composed of a piece of taut, a robust fabric that is stretched and placed between the outer steel frame with the aid of coiled springs. However, other trampolines such as the Springfree trampoline do not use springs but glass-reinforced plastic rods. It seems that the fabric provides the elasticity for bouncing and other recreational activities, but it’s the springs which connect it to the frame and aids in providing the elasticity by storing potential energy.

The backbone of any trampoline lies in its metal frame that supports a spring bed. The bed is composed of durable woven nylon bands and is supported with the aid of 118 to 126 steel springs on an iron or steel framework. The trampoline bed is approximately ¼ inches thick and the overall trampoline has a length of 5.05 metres and a width of 2.91 metres. It is 1.155 metres high with red vertical lines designed on the net. Trampoline usage has several types of injuries associated with it hence large mats known as safety platform are placed on both the sides to prevent the gymnasts from any injuries.

In 1887, the trampoline-like life nets were used by firefighters to rescue and catch the people jumping from the burning buildings. In the 20th century, the bouncing beds were used by some acrobats to amuse and entertain the audiences. It’s believed that an artist named du Trampolin invented trampoline by using the trapeze safety nets for propulsion and landing device.

In 1936, George Nissen and Larry Griswold built the first modern trampoline. They made the trampoline by using traditional ideas of trapeze artists. They used a tight net and inserted grommets on each side by an angle iron frame with the aid of coiled springs. Later in 1942, Griswold and Nissen build their own company called "Griswold-Nissen Trampoline & Tumbling Company" to manufacture trampolines for commercial purposes.