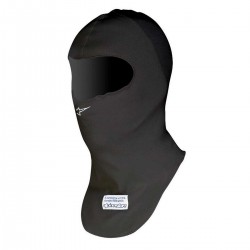 A balaclava is a form of fabric headgear designed to protect the face leaving the eyes or sometimes nose section open. The headgear is used in Formula One as fire-resistant protective wear that driver wears under the helmet. Balaclava covers the crown of the head and goes down to the collar around the neck.

Soon, Formula one race car drivers started using balaclava as protective wear against fire and wore them under the helmet. Down the line, around the 70s and the 80s, the balaclava used by F1 racers had double eye holes for giving complete protection of head and neck.

Usage of Balaclava in F1

Balaclava used in Formula one races is made of two layers of Nomex, a fireproof fabric. In case of accidents, if the car or attire catches fire, then a balaclava will protect the driver. Therefore, they are comprised in fireproof attire and are not facemask. There are two types of balaclava: One with a hole for the eyes region and one with a bigger hole where the nose and eyes portion is left open. The balaclavas with wider holes are helpful for driver to drink fluids. Some balaclava comes with holes that are already stitched.