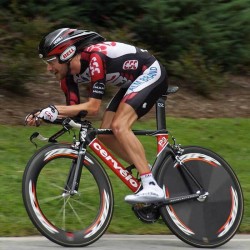 The time-trial bicycles are designed for the time-trial racing competition. It’s a competitive cycling sport where an individual goes against the clock without any peloton and pacers. The time-trial bikes, in contrast to road bikes, are more aerodynamic, have a shorter wheelbase and make the riders come closer to the front region of the frame while cycling. The bikes either have solid disc or spoked wheels. There are no breaks in the time-trial races and no one to draft-off hence the cyclist has to keep pushing as hard as they can to complete the race.

Components of a Time-trial Bicycle

Aerobars - The road bikes had drop bars since the traditional time, which used to help the riders to be in an upright position. But the modern triathlon bicycles have incorporated aerobars on the handlebars. The bars provide the cyclist with a fierce speed and velocity. There are two different types of aerobars’ styles -

Wheels - The wheel’s weight and shape affect the bicycle’s performance the most. The shape is decided on the basis of their prime usage. The racing wheels have carbon fibre rims that are deeper and known as ‘deep dishes’. These wheels increase the stability of the bicycles, affect the turning radius and increase the rider comfort too. Some of the top racing wheels manufacturing companies include HED, Zipp, DT Swiss, Shimano, Easton and Reynolds.

Properties of Time-trial Bicycles and their advantages

Aerobars - It aid in bringing the rider forward, thus increasing the aero-advantage. It saves approximately 3 to 5 minutes.

Aero-drinking bottles - It allows the riders to have hands-free hydration and reduces the drag rate because of non-involvement of arms to interfere with the airflow.

Bar-end levers - The bar-end levers aid in shifting the gear without having to move from a tucked aero position and thus provide better control and faster speed. It saves approximately 30 seconds.

High-quality tires - It reduces the frontal area along with the rolling resistance for the riders with lower power output and saves up to 2 to 4 minutes.

In the 1980s, for the first time, the idea of aerodynamic powered time-trial bicycle emerged. The manufacturers experimented with different frame designing, configuration and tube shapes. The wheel technology went through extreme modifications with the introduction of disc wheels. Traditionally, the wheels come in two different sizes, 650c and 700c. The 650c wheels are smaller and lighter and give an advantage while riding on hills with better comfort. The 700c wheels are the universal size and are used on almost all modern bikes. The new-age bicycles have steeper seat angles and let the rider ride their bicycles with lower handlebars.