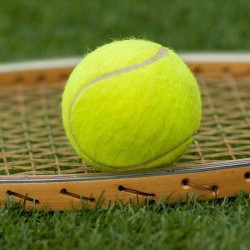 The tennis balls are hollow, spherical balls composed of rubber and have a cover of high-quality fluorescent yellow felt. The outer fibrous felt aids in the aerodynamic property of the ball and has a white curvilinear oval over it. The ball has a pressurized rubber core covered with wool mixed with 35% nylon. The tennis balls get softer after every use. During the match, the players can change the playing ball in regular intervals with the permission of officials and depending upon the court surface. The balls have a uniform surface with stitchless seams. The International Tennis Federation (ITF) is the governing body of tennis and regulates all the rules regarding the tennis ball measurements and manufacturing.

Initially, in the 1870s, vulcanized Indian rubber was used to manufacture the lawn-tennis balls. Traditionally, balls were made solely from rubber but later were used to be covered with flannel stitching across the rubber "core" to improve its wearing and playing properties.

Later, the balls were modified by making the core hollow and pressurizing with gas. The earlier ball models were based on the “clover-leaf” concept in which an uncured rubber sheet was modified into a shape resembling the three-leaf clover. The chemicals required for the production of pressurized gas are added before closing the assembly followed by activating while moulding the core into a spherical shape. This technology was followed for many years until the need for high-quality balls with more uniformity arises.

The balls were later manufactured with two separate “half-shells” compression moulded together to form the core of a tennis ball. The traditionally used flannel cloths to cover the balls are now replaced with “melton” cloth. The earlier stitches present on the balls are also modified by using vulcanized rubber seam. Historically, black and white balls were used to play tennis, but in 1972, the ITF introduced yellow balls. The new balls aid in better visibility, especially to the television spectators.