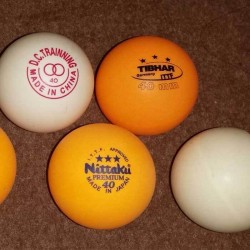 The table tennis balls, also regarded as ping pong balls, are spherical, lightweight and hollow balls made from plastic and celluloid materials. The balls have a 40 mm (1.57 inches) diameter and weigh 2.7 g. They are white or orange in colour with a matte finished outer surface.

Another popular variant of the balls includes the 38 mm (1.5 inches) diameter balls used majorly before the Sydney Olympics held in 2000. These balls are faster and provide more spin than the 40 mm balls. The ball's weight can vary between 2.67 g to 2.77 g. The lighter balls are slower, generally, induce wobbling but the heavier balls are faster and comparatively more stable. Some of the standard table tennis brands include DHS (China), Nittaku (Japan), Butterfly (Japan), Xushaofa (China), Franklin Sports and STIGA.

The table tennis balls are generally made from flammable celluloid plastic with a hollow interior. However, the ITTF (International Table Tennis Federation) allows both celluloid and non-celluloid balls. The celluloid and plastic, both types of balls weight between 2.67 to 2.77g and have a rebound of 240-260 mm and the hardness is approximately the same.

The plastic balls, however, are more precise, have maximum stability and have better roundness but are slower and provide a lesser degree of spin. The plastic balls are manufactured either with a seam or without seam whereas the celluloid balls always have a seam. The best table tennis balls have three star ratings and are ITTF approved.

According to the official rules, the balls should bounce 24 to 26 cm on a standard steel block when dropped from 30.5 cm (12 inches) height and should have a coefficient of restitution of 0.89 to 0.92.

The players highly preferred the celluloid balls as the initial plastic balls produced by Barna Dunlop were very hard and almost unplayable for them. But within a few years, the use of celluloid balls decreased due to its flammable properties, difficulty in transport and storage.

Later, with the cooperation of ITTF, one of the Chinese ball factories started producing the plastic ball samples. This was a breakthrough in the history of table tennis that introduced new technology and machinery for the production of balls. The first plastic balls produced had no seam in them; hence the ITTF didn't approve them immediately. Later, a Japan and a Germany based industry produced plastic balls with seam. With the major changes in balls, the game also became faster with shorter rallies.