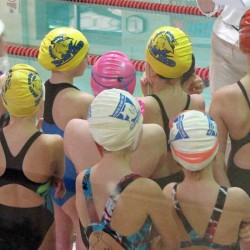 A swimming cap is also regarded as a bathing cap or swim cap. It’s a skin-tight piece of fabric worn on the head. It is made from silicone, latex or Lycra. The swim caps keep swimmer’s hair out of the face and even secure the small hairs on the forehead.

Caps enable the swimmers to swim faster by reducing the hydrodynamic drag. It also protects the hair from any chlorine present in the water along with direct sun rays. Both males and females wear swim caps during the official tournaments. The caps are available in different sizes depending on the swimmer’s head and most common dimensions are -

Evolution of Swim Caps through the years

In the early 20th-century, swim caps were made from rubber fabric. Later in the 1920s, latex was used to manufacture the caps. The traditional chin strap caps resembled a lot to the strapped leather helmets and were known as "aviator’s style caps". Later in the 1940s, rubber was required to make war materials leading to the sudden disappearance of rubber swim caps. In the 1950s, decorated caps were introduced and by the 1960s, they became widely popular among the swimmers.

Between the 1960s and 1970s, many swimming pools mandate the usage of swimming caps for swimmers with long hair. Nowadays, a wide variety of simple yet effective caps are available which are majorly used in all competitive tournaments.